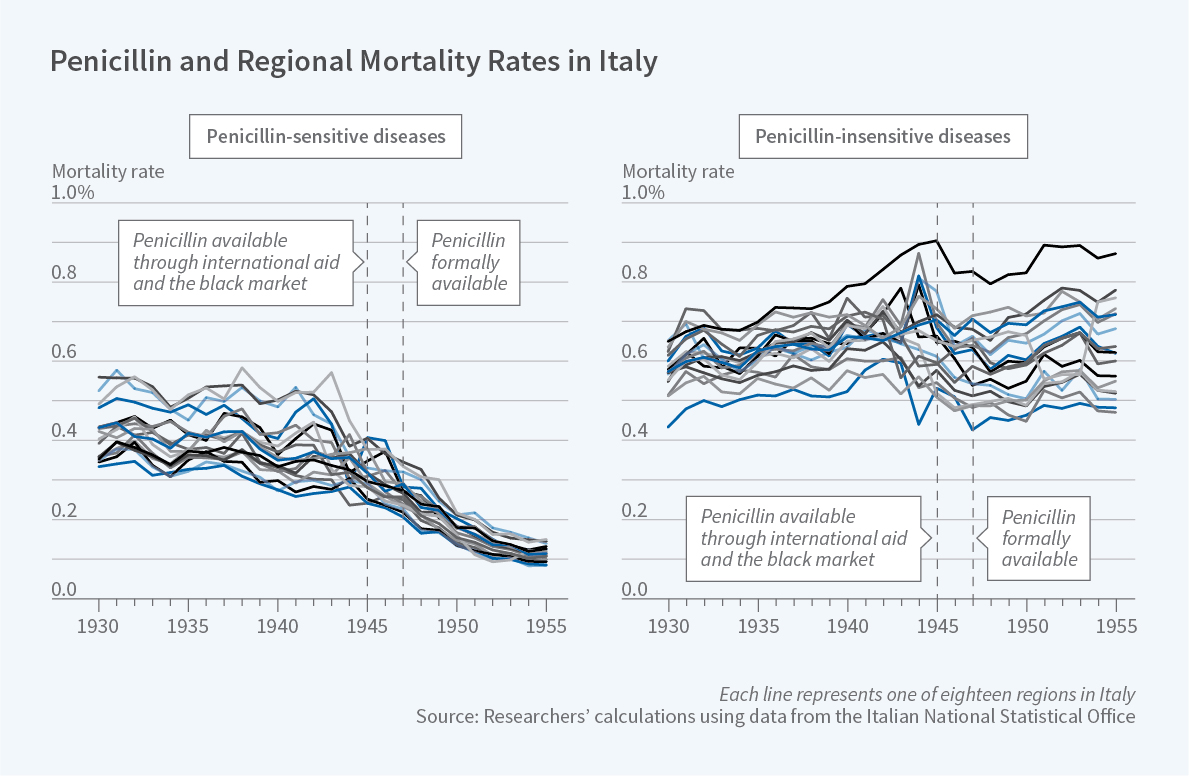 The discovery of penicillin was arguably one of the most important medical advances of the 20th century. In Technological Progress and Health Convergence: The Case of Penicillin in Post War Italy (NBER Working Paper 25541), researchers Marcella Alsan, Vincenzo Atella, Jay Bhattacharya, Valentina Conti, Iván Mejía-Guevara and Grant Miller assess the distributional impact of this innovation on mortality in Italy following World War II.

Penicillin was available in Italy in the mid-1940s in only limited quantities through international aid and the black market. Beginning with its official introduction in 1947, however, it became widely accessible, at no out-of-pocket cost, to any patient with a physician’s prescription. The researchers rely on this discrete change in the availability of penicillin to provide evidence about its impact on mortality convergence across regions of Italy.

One factor that could confound this analysis is the conclusion of World War II shortly before the introduction of penicillin in Italy. Because infectious disease mortality tends to increase during wars, the authors consider this alternative explanation for their results. They estimate models separately for regions that experienced higher vs. lower degrees of exposure to the war, and find that the mortality reductions were slightly — but statistically significantly — higher in the areas with less exposure to the war.

In addition, they find that their results are statistically unaffected if they exclude the years of greatest conflict intensity in Italy — 1943 to 1945 — from their sample period. These patterns suggest that the overall results are unlikely driven by the conclusion of the war. The researchers also find that competing risks are unlikely to explain the results, since even limiting to a short period of time after the introduction of penicillin, the estimated differences are still large.

The researchers note that, in general, new medical technologies have the potential to either reduce or exacerbate health disparities, depending on whether they are disproportionately available to the elite. In the case of penicillin, the evidence suggests that the technological advance acted to reduce disparities in postwar Italy.

Technological Progress and Health Convergence: The Case of Penicillin in Post-War Italy