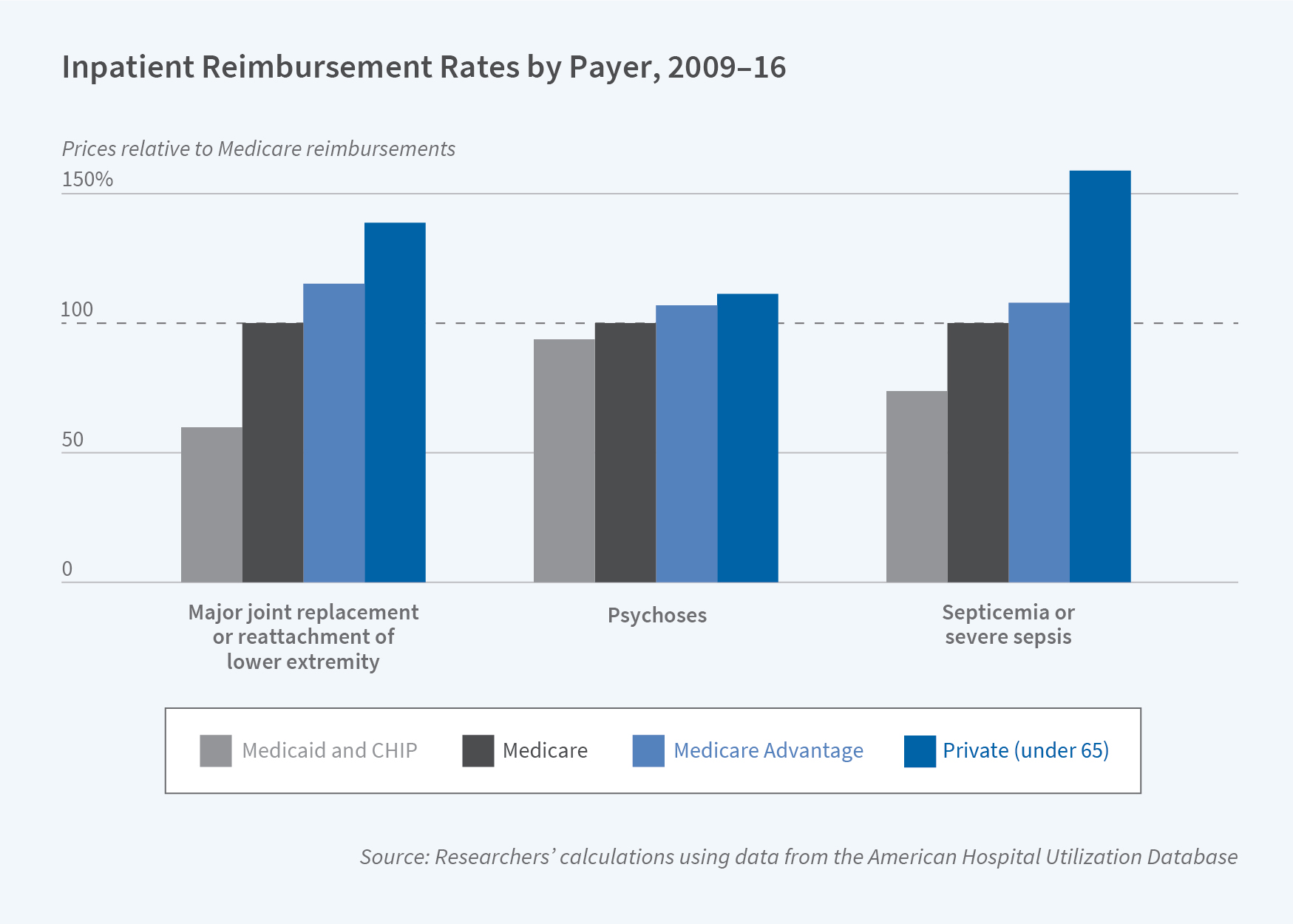 While Medicare pays similar rates to hospitals across the board, the prices private insurers negotiate vary significantly within and across hospitals based on insurers’ size and market share.

MS-DRGs classify inpatient visits based on diagnoses, treatments, severity, and comorbidities. Most Medicare payments are prospective: Medicare pays a fixed amount for each patient in a given MS-DRG regardless of the quantity of services rendered. In contrast, private insurers negotiate prices with each hospital and their negotiated prices are considered trade secrets. Payment structures vary. Some insurers negotiate prospective payments with hospitals. Others pay a percentage of a hospital’s list price, agree to payments that are a percentage of its Medicare reimbursements, or simply negotiate specific payments for specific conditions.

The researchers study a hospital utilization database that includes 474 providers. Most are hospitals, but actual payments are also available for inpatient and outpatient care from skilled nursing facilities, home health providers, and clinics in urban and rural locations. The database includes payments made for the treatment of 80 million patients in 38 states from 2009 through 2016, and it incorporates information on the amounts paid both by patients and insurers, providers’ billed charges, negotiated discounts, and any contractual adjustments for insurers.

Insurers tend to negotiate widely different prices at different hospitals. Further, though large insurers receive roughly similar discounts on average, the discounts they negotiate at any given hospital vary considerably. The researchers study the correlation between the discounts for hip and knee replacements given by various hospitals to each of the five largest insurers — Aetna, Anthem, Cigna, Humana, and UnitedHealthcare — and find almost no correlation for some insurance company pairs, and a correlation as high as 0.82 for others. For the insurer pair with the highest correlation, discounts vary in similar ways across hospitals. For other pairs, however, knowing that one had negotiated a large discount at a given hospital provides almost no information on the discount of the other.

Insurer size matters. A 10 percent increase in market share is associated with a 6 to 7 percent decrease in negotiated prices. Additionally, insurers with dominant market positions tend to negotiate contract structures that are more prospective — based on diagnoses rather than the quantity of care provided. These contracts place financial risk on hospitals.

The researchers do not control for differences in the makeup and competitiveness of the hospital market or for differences in hospital quality, but they conclude that greater insurer market share improves the insurer’s position in hospital-insurer bargaining and allows them to negotiate favorable payment structures.

Variation in Health Care Prices Across Public and Private Payers