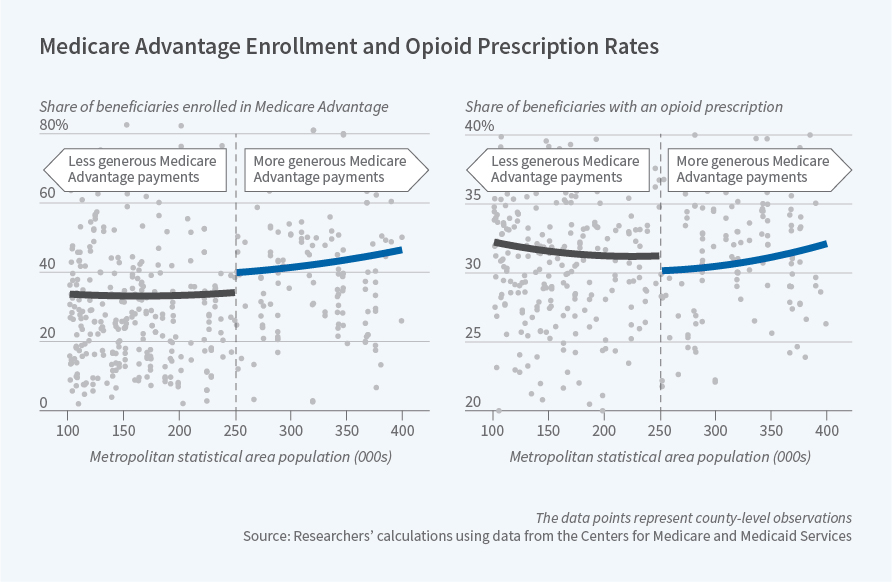 The public health costs of opioid abuse have continued to climb in the United States, contributing to recent declines in life expectancy. One response to mitigating this public health crisis has been to try to reduce use — and especially misuse — of prescription opioids. In The Effects of Medicare Advantage on Opioid Use (NBER Working Paper 25327), Laurence C. Baker, Kate Bundorf and Daniel Kessler suggest that insurance design could contribute to these efforts.

Medicare Advantage enrollment causes a 37 percent reduction in the probability of receiving an opioid prescription.

In addition, MA plans have greater opportunity than stand-alone Part D plans to affect opioid prescription rates. For example, MA plans can choose their network of providers. Selecting physicians on the basis of their tendency to prescribe opioids could affect opioid prescription rates among MA enrollees. Other insurer strategies, such as utilization review, could have a similar effect.

Prior research suggests that MA enrollment is associated with increased use of other types of prescription drugs. The contrasting pattern for opioids, therefore, likely reflects a specific effort by insurers to reduce opioid use, rather than broader constraints on prescription drug use. The researchers conclude that their results support the idea that “integration of prescription drug coverage with the other benefits provided by Medicare Advantage plans improves the quality of care.”

The Effects of Medicare Advantage on Opioid Use