The Effect of Air Pollution on Dementia Diagnoses 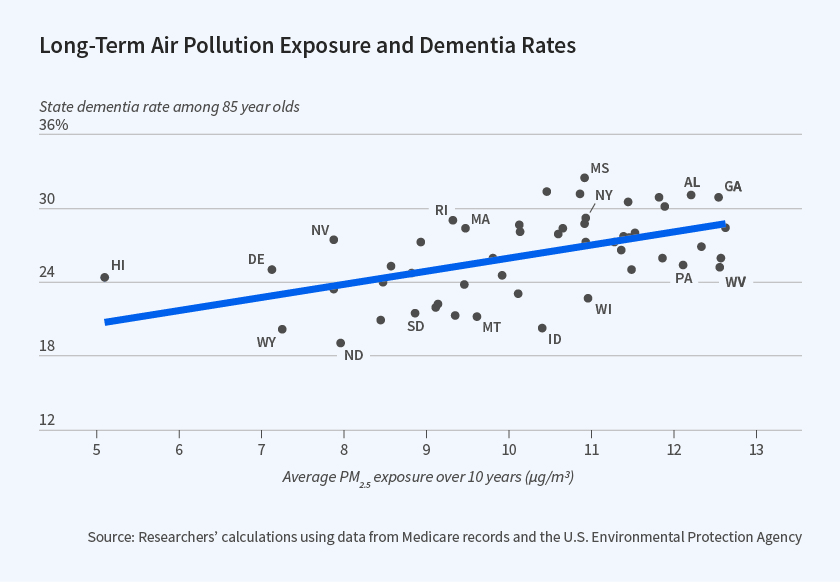 While a substantial body of evidence now confirms the negative effects of exposure to air pollution on children and working-age adults, research on how pollution affects older adults has been more limited. In Hazed and Confused: The Effect of Air Pollution on Dementia (NBER Working Paper 24970), Kelly C. Bishop, Jonathan D. Ketcham, and Nicolai V. Kuminoff examine the impact of long-term exposure to air pollution on older adults, specifically the likelihood that they will suffer from dementia.

The EPA’s decision to regulate fine-particulate air pollution in 2005 reduced the number of dementia cases in the United States in 2013 by approximately 140,000.

The researchers link Medicare records to Environmental Protection Agency (EPA) data on air quality to study how exposure to fine-particulate air pollution (PM 2.5) — a type of air pollution that medical researchers suspect may cause dementia — affects dementia rates. As a source of variation, the researchers rely on the fact that, in 2005, the EPA designated a number of US counties as being in violation of a federal standard on maximum PM 2.5 pollution levels. As a result of this designation, those counties — which were home to more than 25 percent of all Americans over the age of 65 – were required to take steps to remediate the pollution. Individuals living in the designated counties experienced a larger decline in average PM 2.5 exposure over the ensuing decade than those living in other counties.

The researchers find a significant relationship between fine-particulate pollution exposure and dementia rates, calculating that a “1 microgram-per-cubic-meter increase in average decadal exposure (9.1% of the mean) increases the probability of receiving a dementia diagnosis by 1.3 percentage points (6.7% of the mean).” The size of this effect is comparable to two-thirds of the additional risk of dementia incurred by a diagnosis of hypertension and one-third of the risk associated with diabetes.

Using their findings, the researchers estimate the health consequences of the EPA’s decision to regulate PM 2.5. They conclude that it reduced the number of dementia cases in the United States in 2013 by approximately 140,000.

The researchers value this disease reduction using estimates of the economic value of longer, and higher-quality, life, and conclude that the reduction in dementia would be valued at over $150 billion. They point out that other potential benefits, such as decreased Medicare expenditures, reductions in hours of care provided by unpaid caregivers, and improved financial decision-making among older adults, are not considered in this calculation.

Air quality regulations are likely to have equity implications. African-Americans and Hispanics, individuals living in low-income areas, and those with less education are more likely to receive a dementia diagnosis. The researchers observe that “differences in neighborhood air quality may contribute to these socioeconomic disparities in disease burden.”

The negative effects of fine-particulate air pollution persist below the current federal standard, which suggests that tighter regulation could produce meaningful reductions in the prevalence of dementia. The researchers conclude that their findings suggest that it may be appropriate to account for the benefits of reduced dementia in cost-benefit analyses of air quality regulation.

Hazed and Confused: The Effect of Air Pollution on Dementia