The COVID-19 Pandemic and Labor Supply to Startups 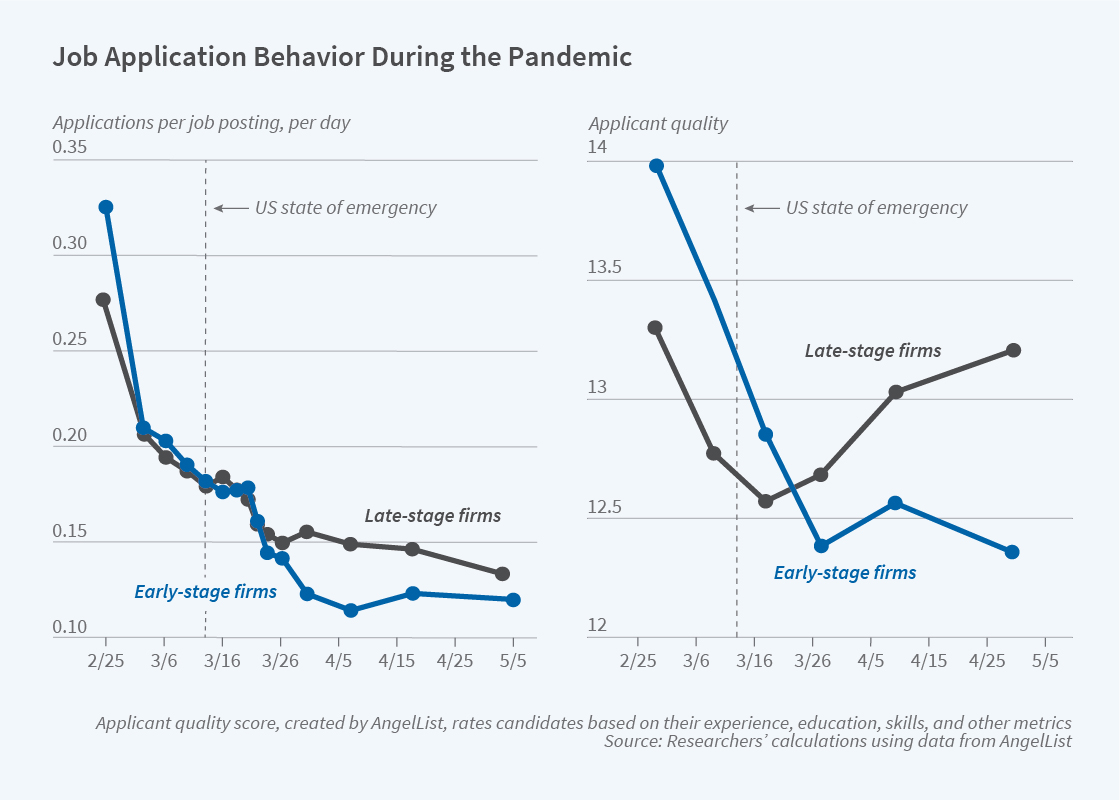 After the outbreak of COVID-19, more-experienced and higher-quality job applicants shifted from early-stage companies to the safety of more-established firms.

Like investors who reallocate their portfolios toward safer assets during volatile times in financial markets, job seekers during the COVID-19 pandemic have shifted their focus from startup businesses to larger firms. During the pandemic, small and young entrepreneurial firms have had fewer job applicants — especially fewer experienced, high-quality applicants — than larger firms. This suggests more generally that fluctuations in job applications to emerging companies may contribute to variation in entrepreneurship over the business cycle.

Shai Bernstein, Richard R. Townsend, and Ting Xu conclude in Flight to Safety: How Economic Downturns Affect Talent Flows to Startups (NBER Working Paper 27907) that labor market dynamics may amplify other cyclical factors, such as frictions in the availability of financing for startups, the spillovers from research and development activity, and decisions by potential entrepreneurs about when to launch new businesses.  New ventures are less likely to thrive if they cannot attract a talented workforce.

Using data from AngelList Talent, an online recruitment platform for private and entrepreneurial firms, the researchers study the searches of 3.6 million job seekers looking at more than 185,000 open positions. They find that after March 13, 2020, when the pandemic was first declared a national emergency, the average size of searched-for firms increased by 25 percent.

The researchers find that individual job seekers were 20 percent more likely to look for companies with more than 500 employees. Searchers also became less choosy in order to more easily qualify for positions at the larger firms. They began to include part-time positions and internships in their searches. They lowered the minimum salaries they would accept, and they looked at a broader range of roles, locations, and markets.

This shift in searches also affected applications. After March 13, applications to larger and more financially mature companies increased, while those to smaller and early-stage firms declined.  This pattern was evident not only in the aggregate pattern of applications, but in before-and-after comparisons of the searches by individual applicants, and in the searchers who reviewed particular job postings, over time.

The researchers rule out a number of confounding factors that might have generated their findings.  The changing application pattern is not due to a shift in the types of jobs posted, to general seasonal patterns of job searches and applications, or to applications in California or Massachusetts, two states with many startup firms that were hit hard by COVID-19 cases early in the pandemic.  There is no evidence that companies lowered salaries or experience requirements. While the number of job postings from large companies fell after the national emergency was declared, postings increased at smaller startups.

“Ultimately, flight to safety in the labor market likely stems from a belief among workers that larger employers offer better job security during downturns, due to, for example, their better ability to secure financing or to maintain product demand,” the researchers conclude.