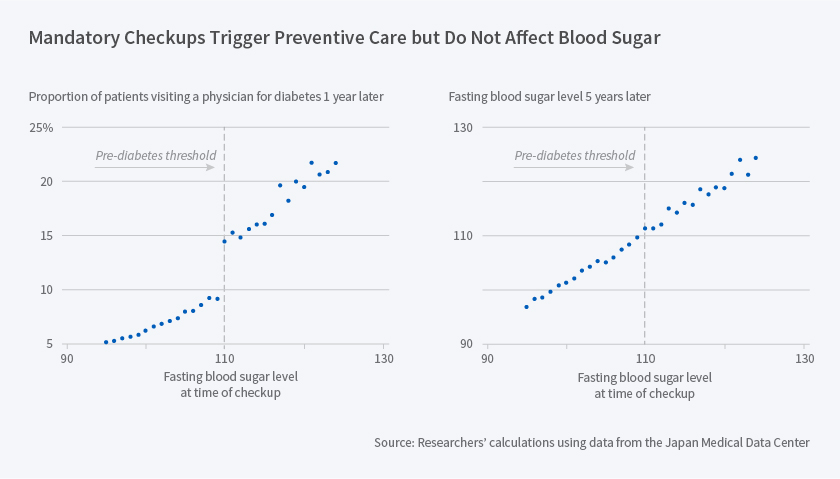 With the incidence of chronic illnesses such as diabetes and cardiovascular disease on the rise in the United States and around the world, the need for effective prevention and management of chronic illness is increasingly apparent. Preventive care, including routine checkups and regular screening tests, offers the potential of intervening early enough to make a difference in the course of a disease.

Researchers Toshiaki Iizuka, Katsuhiko Nishiyama, Brian Chen, and Karen Eggleston investigate the value of preventive care in a new study, Is Preventive Care Worth the Cost? Evidence from Mandatory Checkups in Japan (NBER Working Paper No. 23413).

The researchers focus on diabetes, a prime target for prevention because of the disease's cost and growing prevalence — a recent study suggests that over 400 million adults worldwide have the disease, incurring estimated annual costs of $825 billion. Diabetes is often called a "silent killer" because individuals are asymptomatic in the disease's early stages and may be unaware of the condition, but as the disease progresses they suffer from serious complications including problems of the eye, heart, kidney, nerves, and feet. Diabetes and pre-diabetes can be detected by elevated blood sugar levels as measured by fasting blood sugar (FBS) or hemoglobin A1c (HbA1c) levels, both common diagnostic tests. Diabetes can generally be prevented by early intervention to reduce lifestyle risk factors such as smoking, unhealthy diet, sedentary lifestyle, and obesity.

Japan is the setting for this analysis. Since an annual health checkup is mandatory, studying preventive care in this context eliminates the concern that those who use it may differ systematically from those who do not. Further, the researchers have access to a rich dataset that links data from medical claims, health surveys, and health checkups.

Japanese employers must conduct an annual checkup that includes testing FBS or HbA1c. Employees receive a report after the checkup that includes a warning if test values are above a threshold value. The threshold values are set by employers — many use a 110 mg/dl threshold for FBS, the minimum value to be considered "borderline type" (values below 110 are "normal type" and values above 126 are "diabetic type"). Individuals who receive a warning may schedule a follow-up visit with their provider to discuss the result, though they are not obliged to do so and employers are not required to monitor or enforce such a visit.

The researchers focus on individuals with FBS values near the 110 threshold. People with values just above and just below the threshold presumably face a similar diabetes risk, as blood sugar levels go up and down and cannot be controlled with precision. However, only individuals with a test value above 110 receive a warning. Thus, any clear difference in health behaviors or outcomes between those just above and below the FBS threshold is likely to reflect the effect of the warning.

The researchers find that the probability of visiting a doctor for diabetes rises by 5 percentage points at the threshold, from 10 to 15 percent. While this represents a 50 percent increase, it also implies that most people above the threshold do not seek follow-up care. Some people in this group may not have received a warning, as employers use different thresholds. However, it is also possible that some people discount the importance of the warning even when they receive it.

The researchers test for an increase in preventive care at an FBS value of 126, the lower bound for a diabetic type. The effect is smaller than at the 110 threshold even though this threshold represents a more serious signal of diabetes. The weaker response is consistent with the fact that few checkup reports use 126 as the warning threshold, raising the prospect that many high-risk people are not being alerted to their risk level.

The researchers conclude that they "do not find evidence that additional medical care triggered by health signals is cost-effective." For the borderline type threshold of 110, signals led to some additional use of care but no improvement in health outcomes. For the diabetic type threshold of 126, there was little effect on utilization, likely because most employers use a lower threshold to issue warnings. The researchers suggest that allowing employers to determine their own threshold "may exacerbate rather than mitigate wasteful overuse of some kinds of care while not effectively promoting use of medical resources that are under-used relative to their cost-effectiveness." They also note that the value of health signals may be limited when warnings fail to communicate clearly about health risks and there is no mandate for follow-up care. They write that "if preventive care is indeed cost-effective, then to make prevention work, a more interventionist approach may be necessary."

The authors acknowledge financial support from the Kikawada Foundation.