Skip to main content
Bulletin on Aging & Health: No. 3, September 2017 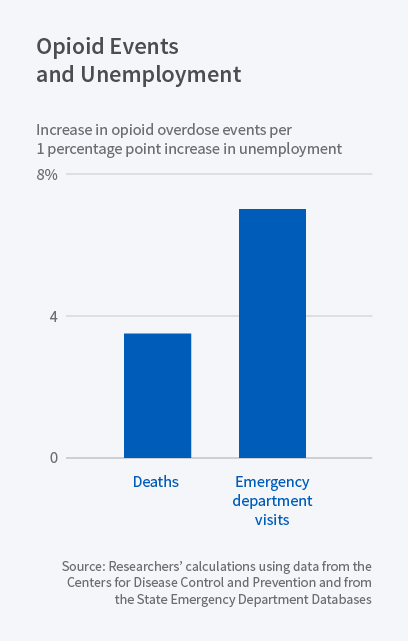 The rate of drug overdose deaths involving opioids tripled between 2000 and 2014, according to the U.S. Centers for Disease Control and Prevention (CDC). One theory that has recently garnered significant attention posits that a decline in economic opportunities for some segments of the population has led to a rise in "deaths of despair," including deaths related to drug use. The fact that some of the recent rise in drug deaths coincides with the Great Recession and its aftermath highlights the importance of understanding the connection between economic conditions and drug deaths.

Researchers Alex Hollingsworth, Christopher Ruhm, and Kosali Simon take up this question in their working paper Macroeconomic Conditions and Opioid Abuse (NBER Working Paper No. 23192). The researchers examine how deaths and emergency department (ED) visits due to opioids and other drugs are related to shocks to the local unemployment rate.

The researchers use data on drug poisoning deaths derived from the CDC's Multiple Cause of Death files for the period 1999 to 2014. These data cover all deaths in the U.S. and include state and county of residence. They also use information from the Healthcare Cost and Utilization Project of the Agency for Healthcare Research and Quality to compile data on drug-related ED visits at the county and state level. While comprehensive national ED visit data are not available, the researchers' data cover a total of 16 states for the years 2000 to 2014 (or parts thereof).

The researchers first use their data to examine trends in drug-related deaths and ED visits. The incidence of all drug-related deaths rose from 6 per 100,000 in 1999 to 16 per 100,000 in 2014. On average, half of these drug-related deaths involved opioids, 17 percent specifically involved heroin, and 38 percent involved only drugs other than opioids. Opioid-related ED visits are also on the rise, growing by about one-third between 2006 and 2014, though they represent just 14 percent of all drug-related ED visits. The probability that an opioid overdose ED visit results in an in-hospital death is 1.2 percent, far higher than the probability of death after an overdose of benzodiazepines, anti-depressants, or other common drugs.

The increase in drug-related deaths has been far more rapid for non-Hispanic whites than for blacks and Hispanics. This leads the researchers to explore whether the effect of macroeconomic conditions on drug-related deaths and ED visits differs across race and ethnic groups. They find that the countercyclical variation in opioid-related deaths and all drug deaths is primarily driven by the effects for whites, with smaller effects for Hispanics and no clear evidence of any effect for blacks. For ED visits, it is not possible to determine whether the effects differ across groups.

"Overall, we obtain strong evidence that opioid-related deaths and ED visits increase during times of economic weakness," the researchers conclude. Turning to possible mechanisms, they note that their results are consistent with a role for supply-side factors such as a loss of health insurance or of public funding for substance abuse treatment during times of economic weakness. The results do not suggest a substantial impact of factors like lower incomes or greater leisure time (which could be used to engage in health-promoting behaviors like exercise or drug treatment programs), as these would be expected to result in reduced drug deaths and ED visits during recessions.

However, the researchers note, "notwithstanding the possible pathways just described, we suspect that the dominant factor linking macroeconomic conditions to adverse drug outcomes is that the fatal and near fatal abuse of opioids often (and increasingly over time) reflects a physical manifestation of mental health problems that have long been known to rise during periods of economic decline... With the increased availability of prescription opioids (and reductions in heroin prices), it seems likely that the consumption of these drugs rises when economic conditions worsen and that some of this increased use leads to adverse outcomes including ED visits or death."