Why Did the Affordable Care Act Raise Coverage? 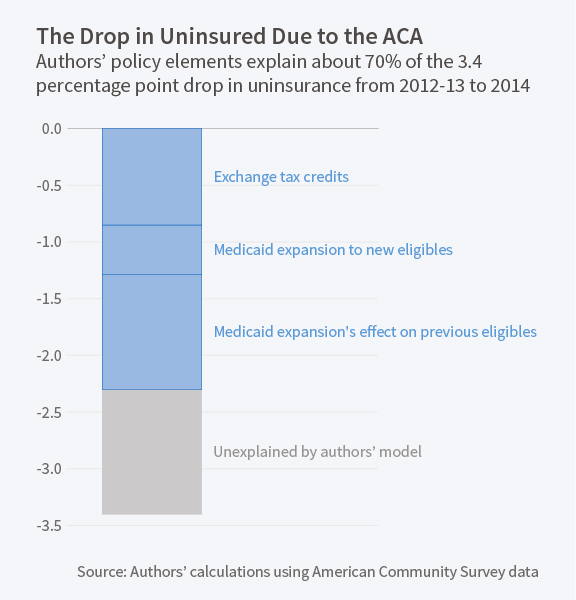 Over the past forty years, the share of U.S. residents lacking health insurance coverage has been high and rising. Concern about this issue ultimately led to the passage of the Affordable Care Act (ACA) in 2010, the most significant expansion of health care coverage in the US since the introduction of Medicare and Medicaid in 1965.

A number of national surveys confirm that the rate of uninsurance has dropped sharply since the ACA's main components went into effect in 2014. But which of the ACA's provisions are most responsible for this change? In Premium Subsidies, the Mandate, and Medicaid Expansion: Coverage Effects of the Affordable Care Act (NBER Working Paper No. 22213), researchers Molly Frean, Jonathan Gruber, and Benjamin Sommers take up this question.

The ACA features a number of core elements designed to help raise insurance coverage, including an overhaul of private insurance market regulation, the introduction of an individual mandate, and the inclusion of policies to make health care more affordable. Among the latter, the most significant are a major expansion of Medicaid (for individuals with incomes below 138 percent of the federal poverty line) and the introduction of premium subsidies for purchase of health insurance on new insurance exchanges (for individuals with incomes up to 400 percent of the poverty line). A 2012 Supreme Court decision made the expansion of Medicaid voluntary, and to date 31 states and the District of Columbia have chosen to expand their programs.

To study the effect of the law on coverage, the authors make use of variation in how the law's provisions impacted different groups. For Medicaid, eligibility depends on year (before vs. after the ACA) and state (expanding vs. non-expanding states), as well as on age, income, disability, and parental status. Premium subsidies depend on year, family income, and state (as eligibility differs slightly in expanding vs. non-expanding states). The tax penalty for noncompliance with the mandate varies by family income and local insurance premiums (as there are no penalties if premiums would exceed 8 percent of income).

The authors focus on the period 2012-14, which spans the implementation of key ACA provisions, and use data from the American Community Survey. They gather all households in the survey that have the same income level and family type—for example, single adults with income between 50 and 100 percent of the poverty line—and then calculate the share of this group that would be eligible for Medicaid if they lived in a given metro area and year. By using this measure rather than actual eligibility, they avoid the concern that eligibility could be correlated with coverage rates for reasons unrelated to the ACA. The authors similarly construct measures of the average premium subsidy and average tax penalty for different kinds of families by metro area and year.

Beginning with some key statistics, the authors report that 14 percent of the sample was uninsured in 2014, although this rate was lower among couples and families with children (9 to 10 percent) and higher among single adults (25 percent). The authors estimate that roughly one-quarter of the population was Medicaid-eligible before 2014 and that an additional 5 percent became eligible that year. They calculate that 64 percent of the sample is subject to tax penalties for noncompliance with the mandate. They find that the average unsubsidized premium is around $8,000 and the average premium subsidy is nearly $1,400, or 16 percent of the total cost.

Next, the authors turn to the key question of interest, the role of different provisions of the ACA in explaining the rise in coverage. To do so, they first estimate the relationship between the Medicaid eligibility, premium subsidies, and tax penalties experienced by those with a given family type, income level, metro area, and year and the coverage rate for that group. They then combine these estimates with the average effect of the law on Medicaid eligibility, premium subsidies, and tax penalties to project the law's effect nationally.

The authors caution that their results are based on only one year of full ACA implementation. Moreover, if some responses to the law occurred during the course of that year, the law's impact at the end of 2014 would be greater than what is estimated here, since the data used in the analysis was collected continuously throughout the year. They note that several previous insurance expansions "took several years to reach steady-state and the ACA is likely to be no exception." They conclude, "how these patterns evolve over time will remain worthy of continuing study."

The authors acknowledge funding from the Agency for Healthcare Research and Quality (grant #K02HS021291).