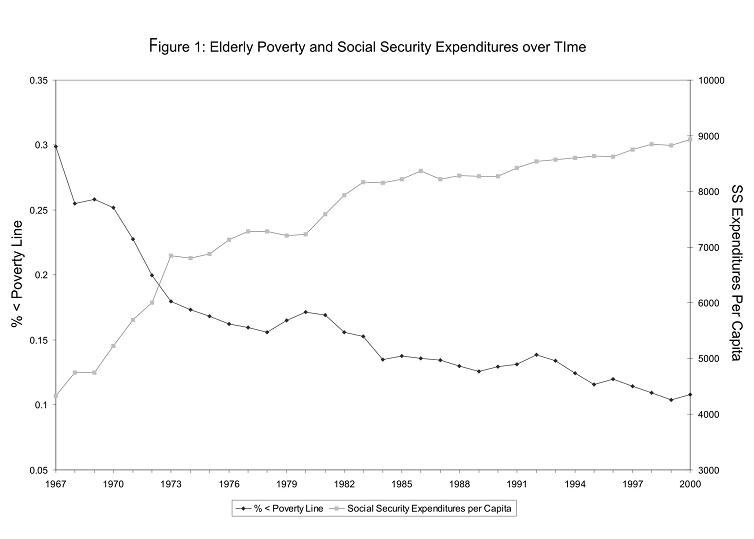 Elderly poverty in the U.S. decreased dramatically during the twentieth century. Between 1960 and 1995, the official poverty rate of those aged 65 and above fell from 35 percent to 10 percent, and research has documented similarly steep declines dating back to at least 1939. While poverty was once far more prevalent among the elderly than among other age groups, today's elderly have a poverty rate similar to that of working-age adults and much lower than that of children.

This association is investigated further by researchers Gary Engelhardt and Jonathan Gruber in Social Security and the Evolution of Elderly Poverty, (NBER Working Paper 10466). Using data from the 1968 through 2001 March Current Population Surveys, the authors first examine aggregate trends in elderly poverty then conduct a statistical analysis to assess the role of Social Security in driving the decline in elderly poverty.

The authors draw several interesting conclusions from their analysis of aggregate trends. First, when poverty is measured relative to median non-elderly income rather than relative to the official poverty line, the decline in elderly poverty ended in the early 1980s. Income inequality has increased markedly since then among the elderly and non-elderly alike. Second, poverty rates are strongly cyclical - rising during recessions and falling during economic expansions - for the non-elderly but not for the elderly, highlighting the protective effect of Social Security. Third, decreases in elderly poverty over time have been similar across age groups but larger for married couples than for other groups.

As the authors note, assessing the causal effect of Social Security on poverty is difficult. For example, individuals may work and save more when benefits are less generous, so a simple calculation of the increase in poverty that would result from eliminating Social Security income would likely overstate the true effect by ignoring these behavioral responses.

To avoid this problem, the authors construct a measure of Social Security benefits that depends only on the Social Security rules that apply to each birth cohort and not on workers' actual labor market experience. They examine the relationship between this measure and poverty rates for people born between 1880 and 1935. For some of the analysis, the authors focus on a narrower range of birth cohorts, making use of the sharp drop in benefits experienced by the "notch" cohorts of 1917-1921.

The authors estimate that a $1,000 increase in Social Security benefits is associated with a 2 to 3 percentage point reduction in poverty rates for elderly households. They also find no statistically significant effect of benefits on income inequality, suggesting that higher-income and lower-income elderly benefit similarly from increases in Social Security.

Applying this estimate to the change in Social Security benefits between 1967 and 2000 suggests that the increase in benefits can explain all of the 17 percentage point decline in poverty that occurred during this period. The authors also find that higher benefits lead some elderly to live independently rather than with family members, and conclude that the effect of Social Security on poverty would have been even more dramatic in the absence of these changes in living arrangements.

Social Security and the Evolution of Elderly Poverty