Medical Spending of the Elderly 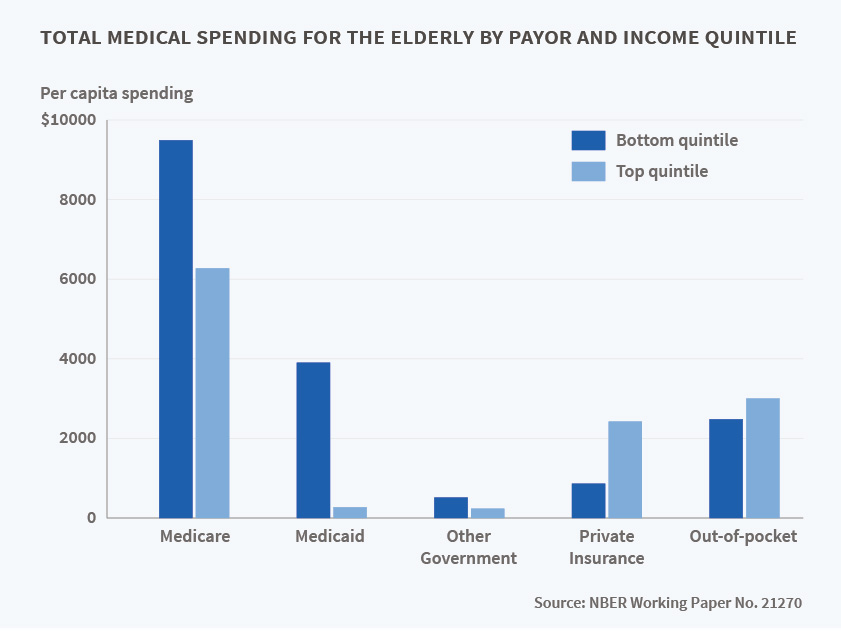 In Medical Spending of the U.S. Elderly (NBER Working Paper 21270), researchers Mariacristina De Nardi, Eric French, John Bailey Jones, and Jeremy McCauley explore the medical spending of Americans aged 65 and older. The authors make use of data from the 1996 to 2010 waves of the Medicare Current Beneficiary Survey (MCBS). The MCBS links administrative Medicare records to survey information from households, providing high-quality data on Medicare payments as well as spending by other payors; respondents are followed for up to three years, providing a longitudinal view of spending.

The financing of health care for the elderly is complex. Virtually all people over age 65 are eligible for Medicare, which provides insurance for hospital stays, doctor visits, and since 2006, prescription drugs. There can be substantial copayments for services covered by Medicare, which may be paid by a supplemental private "Medigap" insurance plan or out-of-pocket by the beneficiary. Nursing home expenses are a significant concern for the elderly, with costs on the order of $77,000 to $88,000 a year in 2014. Relatively few older individuals have long-term care insurance, so most of these costs are paid either out-of-pocket or by Medicaid for those who have exhausted their own financial resources.

The authors begin by reporting the share of medical expenditures financed by different payors. The government pays for two-thirds of health care spending by the elderly, with Medicare accounting for 55 percent, Medicaid for 10 percent, and other government programs for 3 percent. Medicaid funds a larger share of expenses for women than for men (12 percent vs. 6 percent), as older women are more likely to have nursing home stays. Nearly 20 percent of the medical spending of the elderly is financed out-of-pocket, while 13 percent is covered by private insurance.

Turning to the question of how expenses vary with gender and income, the authors find that total spending by all payors is on average about $1,100 per year more for women than men. This difference is due to higher expenditures on nursing homes for women — excluding these costs, average total annual spending is about $500 less for women. By income, those in the bottom income quintile spend about $5,000 more per year than those in the top quintile. Again, nursing home expenditures are key — excluding these, those in the bottom quintile spend only $1,000 more per year. The financing of health care varies also dramatically by income. In the bottom quintile, Medicare pays $9,500 a year and Medicaid $3,900, while private insurance covers just $900 and out-of-pocket spending is $2,500. In the top quintile, Medicare pays $6,300 and Medicaid only $300, while private insurance pays $2,400 and out-of-pocket spending is $3,000.

Medical Spending of the U.S. Elderly