The Competitive Saving Motive in China: Implications for Savings, the Current Account, and Housing Prices

The competitive saving motive refers to saving for the purpose of raising one's relative status in the competition for dating and marriage partners. Unlike the standard life cycle and precautionary motives, it is all about competition with others. The higher an individual's savings relative to others in the same age and gender cohort, the better the individual's competitive position.

Competitive saving can be motivated from an evolutionary point of view, since it refers to the accumulation of wealth to gain an edge in the race to satisfy biological and physiological desires. If not having a sex partner implies a big loss of well-being, people are willing to do a lot to improve their competitiveness on that front. When the competition intensifies, those in the race may adjust their saving rates significantly.

Competitive saving as an explanation for patterns in the Chinese economy was initially proposed in a series of studies by Xiaobo Zhang, Qingyuan Du, and me. We also explore its implications for asset markets, especially housing prices, and for economic growth. The competitive saving motive could be present in any economy, including one with a balanced sex ratio, but its effects are easier to detect in an economy with an unbalanced or changing sex ratio for the marriage age cohort. A shock to the competitiveness of the dating and marriage market, such as a change in the ratio of marriage-age men to women due to sex-selective abortions or infanticide, wars, famines, or immigration can have a profound effect on savings, interest rates and other asset prices, work effort, and economic growth.

A rise in the aggregate saving rate that is triggered by an increase in the sex ratio is socially inefficient. While all young men and their parents hope to improve their chances of marriage by increasing saving and reducing consumption, such hopes cannot be realized in the aggregate, as the total number of unmarried young men for the country as a whole is ultimately determined by the sex ratio, and not by the aggregate saving rate. The economy thus has excess savings that could be consumed with no change to the marriage outcome.

In principle, a surplus of either males or females can trigger a rise in the saving rate via the competitive saving motive. The amount of incremental savings could differ in the two cases if men and women have a different tolerance for involuntary singlehood.

Empirically, there is abundant evidence that relative wealth helps one to gain status in the dating and marriage market. For example, wealthy Chinese men have little trouble finding wives. Du and I investigated patterns of gender imbalance and private-sector saving rates across countries. Specifically, we ran a non-linear panel regression of the aggregate saving rate on the sex ratio and other control variables, including country and year fixed effects over the period from 1990 to 2010. The sex ratio is defined as the male-to-female ratio for the premarital age group of 10–24 (from the United Nations Population Division). We found that countries with a more skewed sex ratio tend to have a higher saving rate. For robustness, our regressions also controlled for the effects of per capita income, the dependency ratio, the government fiscal deficit, and a proxy for financial development. The basic conclusion still held.

Zhang and I also go beyond cross-country evidence and examine household-level evidence. We focus on China, as it is geographically large and there are significant differences in the degree of gender imbalance across regions. At the national level, the sex ratio for the Chinese premarital cohort increased from near-balance in 1990 to about 115 young men per 100 young women in 2007. China's household saving rate (out of disposable income) almost doubled, from 16 percent to 30 percent, during the same period. The time series data on the national saving rate and the sex ratio for the premarital cohort clearly move together.

The time series pattern is suggestive; the household-level evidence across regions is even more revealing. While China as a whole exhibits a rising male-to-female ratio, the extent of the gender imbalance varies widely across the country. For example, Anhui Province has a very unbalanced sex ratio, on the order of 120 young men per 100 young women, whereas Inner Mongolia is almost balanced. As it is uncommon for people to migrate across regions for marriage, we can examine how saving rates respond to changes in local marriage market conditions. The competitive saving theory predicts that families with an unmarried son living in a region with a more unbalanced sex ratio are likely to have a higher saving rate. This pattern is not predicted by more standard theories of saving behavior. 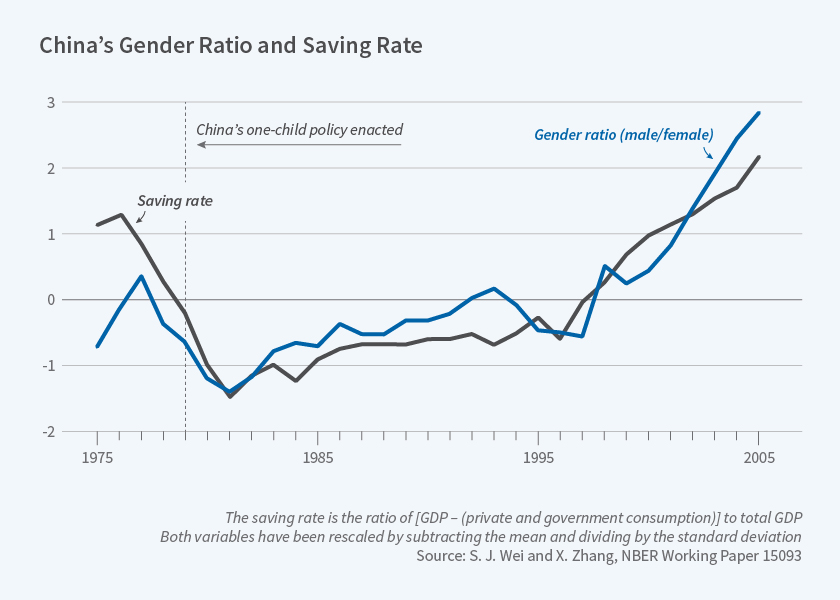 To examine the empirical relationship between household saving rates out of disposable income and sex ratios at the county or city level, we run regressions, taking into account other determinants of saving rates such as household income, the age of the head of household, gender, ethnicity, education level, children's ages, and whether family members have major health problems. The interaction effect predicted by our theory is strongly borne out in the data. Zhang and I found that families with unmarried sons living in rural areas of regions with a more skewed male sex ratio indeed tended to have higher saving rates. In comparison, the saving rates of families with an unmarried daughter appeared uncorrelated with the gender imbalance at the local level.

Across Chinese cities, saving rates of both families with unmarried sons and those with unmarried daughters tended to rise as gender imbalance increased.

These patterns are consistent with the basic prediction of the competitive saving theory: Saving tends to be higher in regions with greater imbalance, especially among families with unmarried sons. The patterns of saving by households with unmarried daughters are also consistent with a model that allows for intra-family bargaining. When women or their parents are concerned about the erosion of bargaining power vis-à-vis their prospective husbands or their families, they may choose not to reduce their saving rate in response to the gender imbalance. When the effect of intra-family bargaining dominates, the saving rate of families with unmarried daughters could rise in response to an increase in the number of males to females.

By extension, the sex ratio imbalance is a "missing" fundamental variable underlying many of these countries' current account surpluses, since a country's current account is the difference between national saving and investment. A one-off increase in the sex ratio can cause a temporary — but large — rise in the current account. The latter will shift to the long-run equilibrium level when all cohorts in the society have adjusted fully to the new male-to-female ratio. Nonetheless, the transition period can be as long as a decade. If, instead of a one-off increase, there is a sustained rise in the gender imbalance, as is the case in China, the economy's current account surplus could last even longer. If a large country such as China runs a surplus when competitive saving motives are heightened, the rest of the world has to collectively run a current account deficit during the transition period.

Gender imbalances exacerbate the competitive saving motive, which may have created the erroneous impression of an undervalued real exchange rate for China.3 If governments were to artificially appreciate the nominal exchange rate to reduce a current account surplus whose root cause is a rise in competitive saving triggered by heightened gender imbalance, they would be creating distortions rather than resolving them. My research suggests that instead of simply focusing on the nominal exchange rate, a broader look at structural determinants of saving and current accounts may turn out to be more productive and helpful in the long run for policy discussions of global imbalances and their correction.

The competitive saving motive has implications for asset prices too, especially housing prices. The standard theory regards houses as both a consumption good and as an investment. The competitive saving theory suggests that there may be a third dimension: Home ownership is also a tool for status competition, including competition for relative social standing in the dating and marriage market. This feature can be relevant in economies with or without a sex ratio imbalance. In a calibrated model, Zhang, Yin Liu, and I show that both house prices and the house price-to-rent ratio would be higher in the presence of the status competition motive than in its absence, even in an economy with a balanced sex ratio. A skewed sex ratio could substantially raise the quantitative relevance of the status competition consideration in understanding housing prices.4

To improve one's standing in the dating and marriage market, raising the saving rate is not the only possible strategy. Increasing labor supply and engaging in more high-risk, high-return activities, including entrepreneurship, are also possible strategies. These behaviors could have implications for economic growth. Indeed, Zhang and I find that regions within China with more skewed sex ratios in 1995 tend to exhibit a stronger growth in the number of private-sector firms in the subsequent decade. Households that simultaneously have an unmarried son at home and live in a region with a more skewed sex ratio for the dating age cohort tend to supply more labor. We estimate that the increased sex ratio in China may have boosted real GDP growth by as much as 2 percentage points per year in recent years. Importantly, we point out that this additional growth may not correspond to an improvement in welfare.5 In this sense, a skewed sex ratio can produce immiserizing growth.

Shang-Jin Wei is the N.T. Wang Professor of Chinese Business and Economy at Columbia University's Graduate School of Business and School of International and Public Affairs. An expert on international finance, trade, macroeconomics, and China, he was chief economist of the Asian Development Bank and director general of the bank's Economic Research and Regional Cooperation Department from 2014 through 2016. He is the director of the NBER's Working Group on the Chinese Economy and is affiliated with the programs in International Finance and Macroeconomics, International Trade and Investment, and Development Economics.

Prior to joining the Columbia faculty in 2007, Wei was assistant director and chief of the Trade and Investment Division at the International Monetary Fund. He has also been an associate professor of public policy at Harvard University and the New Century Chair in Trade and International Economics at the Brookings Institution. Wei holds an M.S. in finance and a PhD in economics from the University of California, Berkeley. Wei received the Sun Yefang Prize for Distinguished Contributions to Economics for his research on the competitive saving motive, the Zhang Peifang Prize for Contributions to the Economics of Development for his research on the measurement of global value chains, and the Chinese Economist Society’s Gregory Chow Award for best research paper.