In the past few years, trade economists have begun developing general equilibrium models where country size and distance play a crucial role in the determination of the equilibrium trade relationship. This research aims at advancing the understanding of general equilibrium spatial models, with special emphasis on their policy implications. The investigators first construct an integrated spatial framework encompassing a large number of general equilibrium economic models in which many locations are connected through one or more spatial linkages (e.g. trade, commuting, spatial knowledge spillovers). This project further develops new tools to characterize both the theoretical and empirical properties of the equilibrium of such models and optimal policy in these setups. Lastly, the investigators apply the framework and tools to address a number of important policy questions such as: what are the economic impacts of infrastructure investment projects; how should one best design location-based policies within cities and communities; and what are the effects of shocks on the evolution of economic development across space? The scope of this research comprises six projects: (1) an analysis of the positive properties and comparative static implications for trade and geography models with a single spatial linkage; (2) an analysis of the positive properties of the equilibrium of spatial models with an arbitrary number of spatial linkages; (3) a characterization of the optimal use of land within Chicago using an urban model in the presence of spatial knowledge spillovers; (4) a characterization of the optimal transportation infrastructure improvements within the United States; (5) a quantification of the importance of path dependence in the evolution of the U.S. economy over time; and (6) an analysis of the welfare implications of immigration policy. These projects have the potential to contribute to the advancement of knowledge in a number of ways, including: (1) it helps to integrate the fields of trade, economic geography, and urban economics by providing a single unified framework suitable for the study of many types of spatial interactions; (2) it offers a general characterization of the positive properties of spatial equilibria; and (3) it develops new tools to conduct the empirical analysis of spatial models on real world economic phenomena and characterize optimal spatial policies. 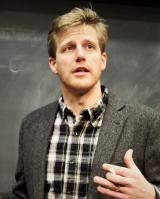 This project is supported by the National Science Foundation under grant number 1658838.