US versus European Productivity Growth and the ICT Boom 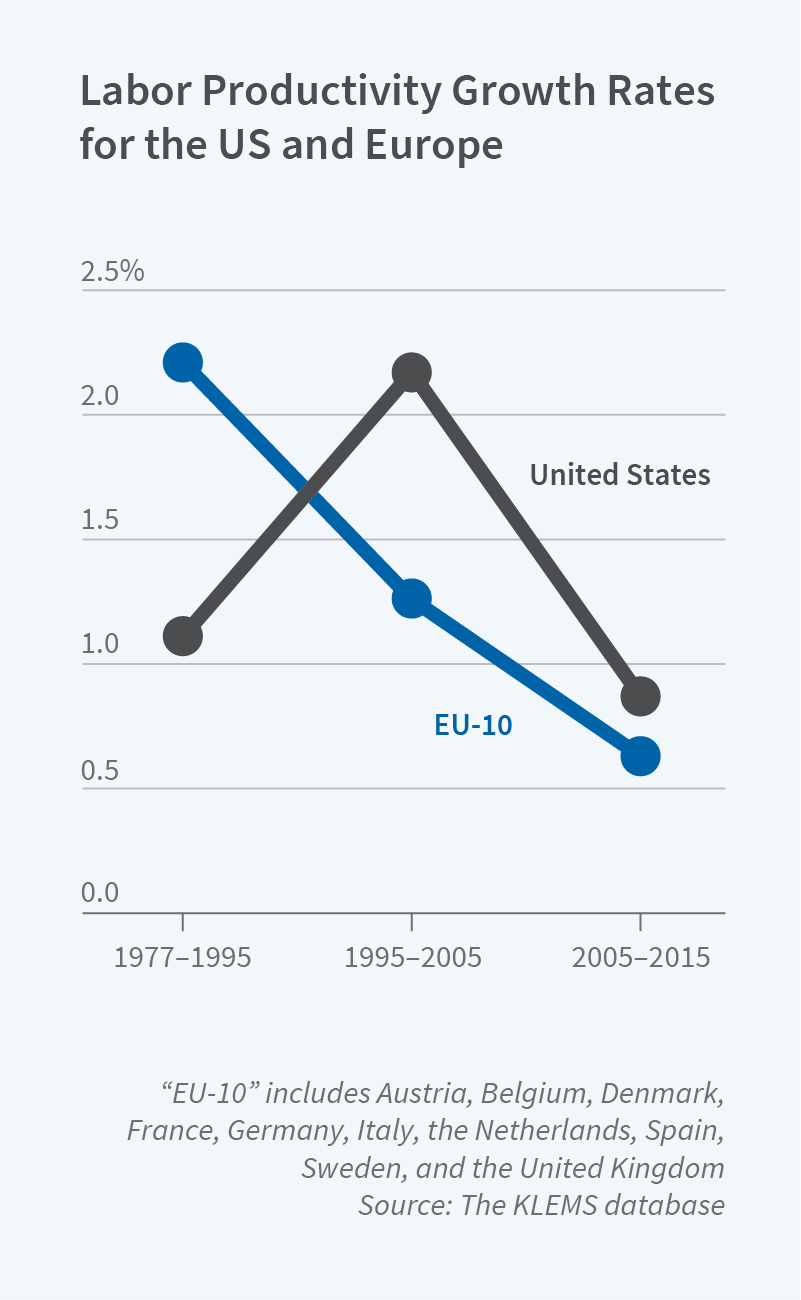 This temporary increase in US productivity growth is typically credited to a surge in investment in information and communications technology (ICT). In Transatlantic Technologies: The Role of ICT in the Evolution of US and European Productivity Growth (NBER Working Paper 27425), Robert J. Gordon and Hassan Sayed present new evidence on this issue by asking whether ICT investment explains why during 1995–2005 productivity growth accelerated in the US while it slowed in Western Europe.

They begin by showing that in aggregate data, the increase in ICT can explain only about one-third of the US productivity growth surge between 1995 and 2005 — an apparent refutation of the standard narrative. However, the researchers dig deeper and explore the relationship between the growth of labor productivity and ICT intensity in 27 industries, which they categorize as “‘ICT-producing,” “ICT-use-intensive,” and “non-ICT-intensive.” Contrary to the economy-wide analysis, this industry-specific approach suggests that ICT-intensive industries in the services sector explain most of the US increase in productivity growth during 1995–2005.

To compare the Western European experience with that of the US, the researchers aggregate data from 10 Western European economies into a single EU-10 entity. One piece of evidence that ICT investment was less important in the EU-10 is that productivity growth in ICT-intensive industries did not differ from non-ICT-intensive industries during 1995–2005 or after 2005. The only exception to this was the information/communications industry itself, which was unique among EU-10 industries, performing almost as well as those in the US during the 1995–2005 interval.

The two-stage slowdown in the EU-10 — after 1995 and again after 2005 — occurred across all industries. The researchers conclude that the disappointing EU-10 experience in 1995–2005 versus that of the US is explained not just by a single cause but rather by a multiplicity of factors: (1) lower productivity growth in the production of ICT equipment, (2) lower investment in ICT across all industries, (3) a lower payoff to the ICT investment that did occur, and (4) poor productivity performance compared to the US in specific industries, particularly retail-wholesale, finance-insurance, and agriculture.

Transatlantic Technologies: The Role of ICT in the Evolution of U.S. and European Productivity Growth