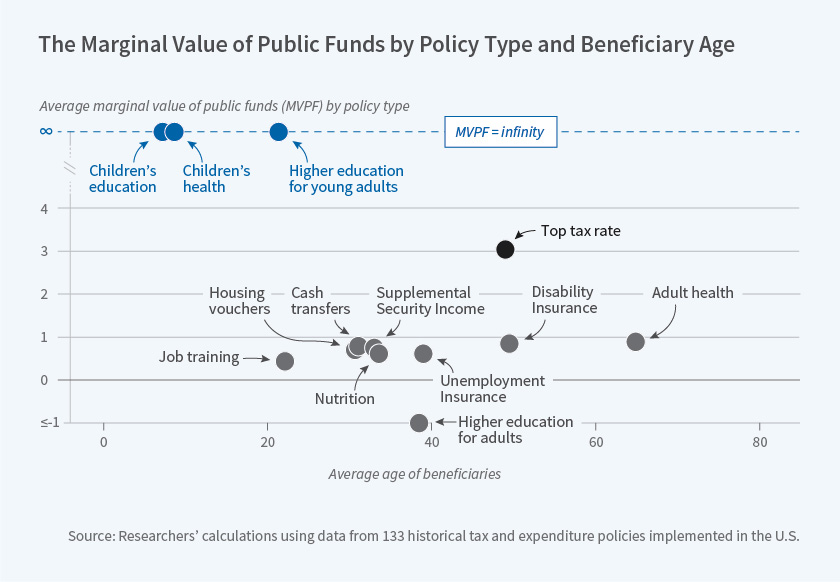 Each dollar of initial spending on Medicaid expansion for children yielded $1.78 in future tax revenue and savings on government transfer programs.

Which government programs provide the most benefits per dollar spent? Nathaniel Hendren and Ben Sprung-Keyser examine 133 historical policy changes in the United States over the past half century to explore this question. In A Unified Welfare Analysis of Government Policies (NBER Working Paper No. 26144), they analyze policies spanning health and disability insurance, education and job training programs, taxes and cash transfers, and in-kind transfers such as housing vouchers and food stamps. Their analysis shows that direct investments in the health and education of low-income children yield particularly high returns.

The researchers draw upon a wide body of existing research to estimate the benefits each policy provides to its recipients and the net costs of the policy to the government. For the benefits, they sum a number of benefits, the largest of which is the present discounted value of the change in beneficiaries’ future income as a result of program participation. For the costs, they measure the present discounted value of the program’s current and future costs to the government, including any effects on tax revenues and government benefits. The ratio of a policy’s benefits to its net governmental cost forms what they call the Marginal Value of Public Funds (MVPF). The MVPF measures the benefits per net dollar spent by the government.

The figure plots the MVPF ratio for a variety of policies, arrayed by the age of each policy’s beneficiaries. The clustering of estimates in the upper left reveals that direct investments in children have historically had the highest ratio of benefits to net government cost. Expansions of health insurance to children, investments in preschool and K-12 education, and policies increasing college attainment all yield high returns.

The estimated MVPF is generally high for policies targeting children, regardless of their age. This finding challenges the notion that opportunities for high-return investments in children decline rapidly with age.

In some cases, the researchers found that the policies did not actually cost the government any money in the long run. This is the case for spending on early childhood health intervention, which reduced subsequent Medicaid-financed health care needs and raised future earnings and taxes. In present discounted value terms, spending money on this program improved long-run government finances. In the case of four major Medicaid expansions studied in previous literature, the researchers estimate that each dollar of initial spending was fully repaid and that the policy returned an additional 78 cents to the government. This means the policy has a higher return than other policies with positive costs. The researchers represent this as an infinite MVPF, shown at the top of the figure.

Another example of a policy that did not cost the government money in the long run is government spending on public universities. Using evidence from Florida, estimates suggest that raising enrollment in public colleges pays for itself over the long run through increased tax revenue and reduced transfer payments.

For policies that target adult beneficiaries, the researchers generally find lower MVPF ratios than for programs targeting children, but often benefits are approximately equal to costs. For example, for health insurance expansions to adults the researchers find MVPF ratios of 0.8 to 1.6. This means that every dollar of net government spending delivers 80 cents to $1.60 of benefits. There is a wide range — from 0.1 to 1.2 — for tax credits and cash welfare programs for low-income adults. Many of these policies were associated with lower earnings for beneficiaries, and a thus a decline in government revenue. There is some heterogeneity across specific policies, and some policies targeting adults have higher MVPF ratios, particularly if they generate spill-over benefits for children. A complete summary of the estimated MVPF ratios by program may be found at www.policyinsights.org.