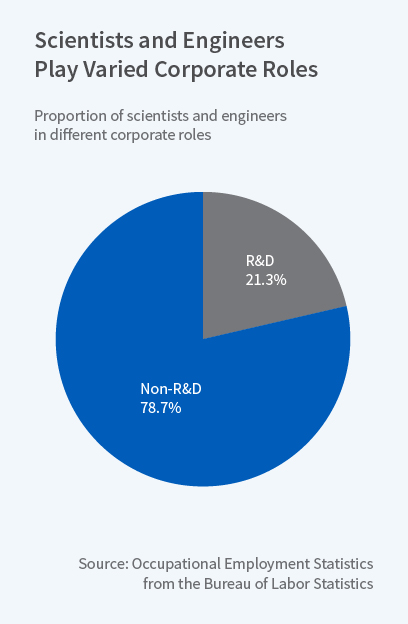 Production establishments with higher percentages of scientists and engineers in their workforces have higher productivity and pay more.

While many scientists and engineers in industry work in laboratories and create patents, the majority employed in the United States falls outside of the oft-studied "research and development" umbrella. Most work for goods- and services-producing establishments, implementing new technologies and lowering production costs. About 80 percent of industry scientists and engineers work outside of formal R&D roles, and over two-thirds of scientists' and engineers' work time is engaged in non-R&D activity.

In The Effects of Scientists and Engineers on Productivity and Earnings at the Establishment Where They Work (NBER Working Paper No. 23484), Erling Barth, James C. Davis, Richard B. Freeman, and Andrew J. Wang find a positive relationship between the share of scientists and engineers in an establishment's workforce and its productivity and employee earnings. The researchers use the Census of Manufactures, the decennial census, and the Longitudinal Employer-Household Dynamics database to link manufacturing establishments with employees and to measure the "scientists and engineers proportion" (SEP) of employment between 1992 and 2007.

Manufacturing serves as a prime area of study because its annual labor productivity growth rate, 3.5 percent, is higher than that seen in the rest of the U.S. economy (2.0 percent) between 1990 and 2016. While the manufacturing sector accounts for 10 percent of the overall industrial workforce, it employs 20 percent of all scientists and engineers.

The researchers find a significant positive relationship between SEP and total factor productivity at manufacturing firms. However they note that, because they can only identify the occupation of 17 percent of the workers in their manufacturing sample, their estimates of SEP may be imprecise. They address measurement error by limiting the sample to establishments with at least 10 workers who have an identified occupation from the match, and by applying a "shrinkage" adjustment to the estimated SEP of an establishment, depending on the variance of the estimated SEP. They find that a 10 percentage point increase in SEP is associated with a 4 percent increase in an establishment's total factor productivity.

The researchers also find a positive relationship between SEP and earnings. They caution that this could be a selectivity issue caused by firms choosing whom to employ and employees choosing where to work. To overcome this, they examine the same employees over time when the SEP in the workplace changes either because the employer increases or decreases SEP or because the employee switches to an establishment with a different SEP. The positive correlation between earnings and SEP is mostly due to workers changing employers, not to employers changing the share of scientists and engineers at the workplace. Moving to an establishment with a 10 percentage point higher SEP can mean 2 percent higher earnings.

These findings indicate that scientists and engineers work not only in dedicated R&D activity to create new technology, but also at the establishment level to implement technology in production processes and thereby improve productivity.