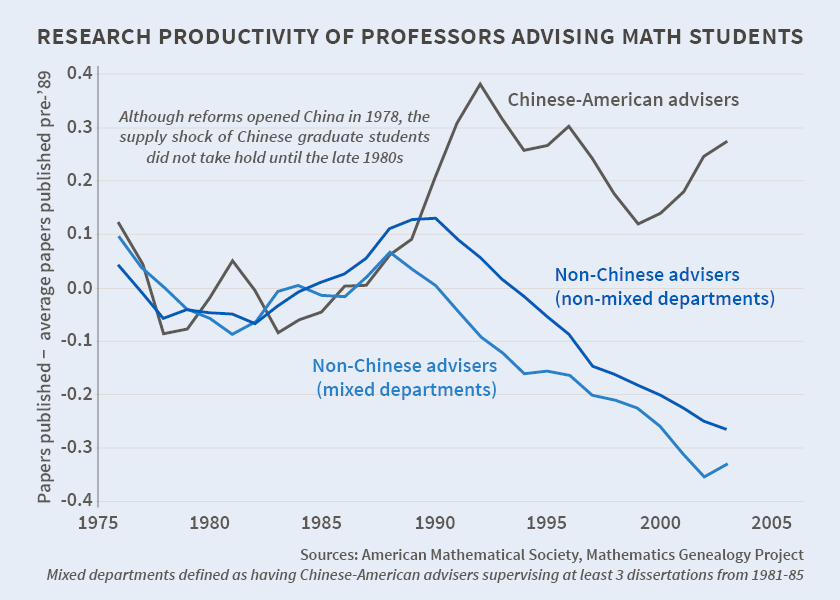 Rising numbers of Chinese graduate students raised the productivity of faculty with Chinese heritage and correspondingly reduced publications by the non-Chinese.

After decades of isolation, the Chinese under Vice Premier Deng Xiaoping's "Open Up" reforms sent thousands of college students abroad. Deng's goal was to close the education gap between China and the rest of the world that had been exacerbated by the Cultural Revolution.

The sudden influx of Chinese students to universities outside China offers an opportunity to test the "ethnic magnet" hypothesis, which posits that people who share cultural and linguistic backgrounds are likely to have a more powerful collaborative experience than those who do not.

Ethnic Complementarities after the Opening of China: How Chinese Graduate Students Affected the Productivity of Their Advisors (NBER Working Paper No. 21096), by George J. Borjas, Kirk B. Doran, and Ying Shen, provides support for this hypothesis by studying the effect on the relative productivity of mathematics professors in the United States.

Using publication rates as a yardstick, the authors find that the productivity of advisers of Chinese heritage in mathematics departments increased as the result of the "supply shock" of Chinese students. These gains were almost exactly offset by a decline in productivity by non-Chinese professors in the same departments.

The authors assess the productivity of doctoral advisers before and after 1989, the year in which Chinese doctoral students became a significant presence in U.S. Ph.D. programs in mathematics. In order to ensure that the sample group includes only mathematicians who were already established prior to the Chinese influx, the sample group is restricted to professors who had published at least one paper before 1986.

The researchers culled data from the American Mathematical Society's listings of publications, the Mathematics Genealogy Project's records of adviser/advisee pairs, and the FamilyEducation.com listing of common Chinese surnames. They find that Chinese students gravitated toward Chinese-American professors. Those professors saw a slight increase in their mentoring load, but more importantly the mix of their students became markedly more Chinese.

The authors find that pairing a Chinese student with a Chinese mentor increases the likelihood of a collaborative paper by 17 percent. In addition, such ethnic pairings also appear to increase the professors' non-collaborative work by stimulating them to tackle new avenues of research.

After the increase in the number of Chinese graduate students, Chinese-American professors increased their average annual production of research papers to 1.7 from a previous average of 1.5. Production by non-Chinese professors declined from an average of 1.4 papers per year to 1.3 during the same period.

That decline, the authors say, is related to the fact that the universities kept the overall number of doctoral slots in mathematics Ph.D. programs roughly constant despite the increased supply of well-qualified graduate students from abroad. The effect was to crowd out American students. With the Chinese students opting for Chinese professors, other faculty members had fewer advisees and consequently fewer opportunities to co-author papers. Furthermore, as their mentor load declined, those professors may have been assigned more administrative tasks, cutting into their research time.

The study found no significant differences among the Chinese-American and other professors when it came to the quality of their work, as measured by the number of times their papers were cited by other researchers. It also found that Chinese and non-Chinese students had similar careers after receiving their Ph.Ds.

The researchers conclude that American universities missed out on a singular opportunity to boost mathematical knowledge because, had they accepted more doctoral students in response to the increased supply of Chinese applicants, the gains of Chinese professors would not have come at the expense of non-Chinese faculty.

Ethnic Complementarities after the Opening of China: How Chinese Graduate Students Affected the Productivity of Their Advisors