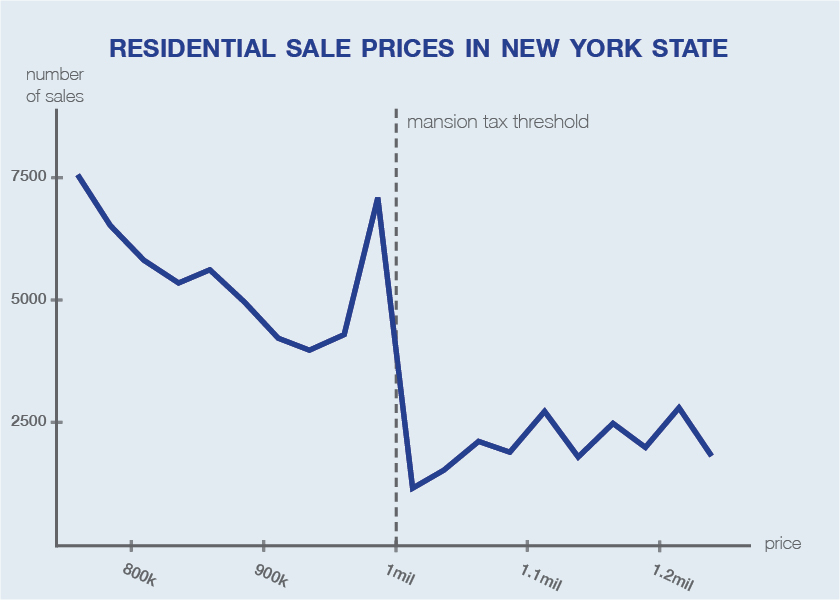 ...sales data show a substantial bunching of transactions right below the $1 million level.

New York City levies a "mansion tax" on real estate transactions that exceed $1 million in value. In Mansion Tax: The Effect of Transfer Taxes on the Residential Real Estate Market (NBER Working Paper No. 20084), Wojciech Kopczuk and David Munroe study the impact of these taxes on real estate transaction prices and the level of trading volume around tax thresholds. They study housing market data from both New York and New Jersey, which also levies a transaction tax, and find evidence that the taxes disrupt residential sales at the price point at which they take effect. Some sellers apparently reduce their transaction prices so that they fall below the threshold, and others choose not to sell at all.

In New York City, if a property sells for $999,999, no mansion tax is due, but if it sells for $1 million, the tax due is $10,000. This represents a "notch" in the tax schedule: a small change in the value of the transaction can trigger a discrete increase in tax liability. Not surprisingly, sales data show a substantial bunching of transactions right below the $1 million level. They also show "missing sales" just above the $1 million level. Relative to the number of transactions one would predict just above this threshold based on the number of sales in other price ranges, there are too few sales. The authors estimate that there were 2,800 such missing transactions in New York between 2003 and 2011, equivalent to the number of transactions that would have occurred otherwise in the price range of $1 million to $1.04 million. They conjecture that in some cases, if a property would sell for just over $1 million, the sellers may take it off the market or delay the sale, perhaps by renting. The authors conclude that "this one percent tax, applying at a relatively large threshold, managed to eliminate 0.7% of transactions."

The results suggest that the tax may distort market prices by more than the tax due. For example, it appears that even though the tax on a $1 million property is $10,000, some sellers may offer up to $20,000 in discounts to avoid the tax. The authors also emphasize that the tax has an "unraveling effect." They write that "the notched design of the tax can destroy a market for housing with values close to the notch." When potential taxpayers have the option of not participating in a market, as they can in the real estate market by not offering their property for sale, a notched transaction tax can destroy productive matches between potential buyers and potential sellers.

Mansion Tax: The Effect of Transfer Taxes on the Residential Real Estate Market