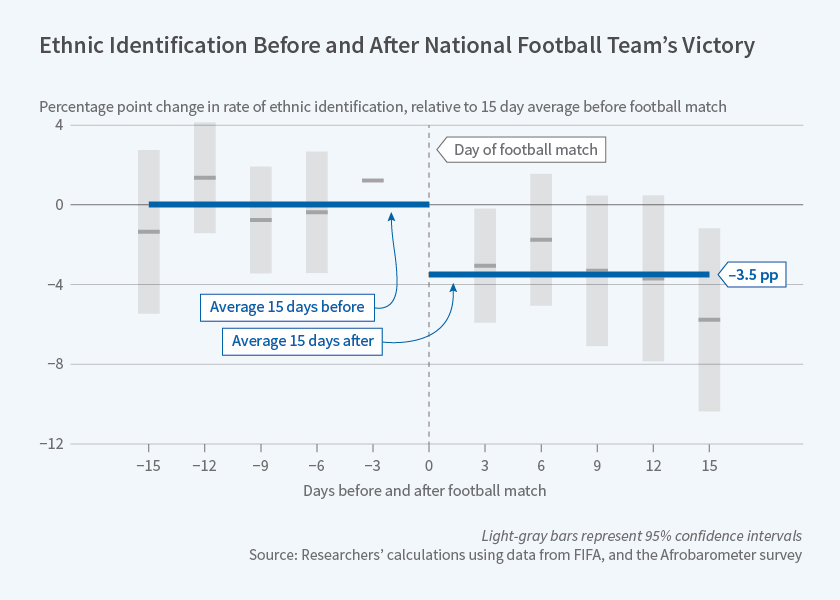 Africans interviewed after key national team victories were 4 percentage points less likely to report a strong sense of ethnic identity than those interviewed just before the match.

Nations struggling with ethnic, linguistic, or regional tensions appear to come together when their national soccer teams are successful.

Building Nations Through Shared Experiences: Evidence from African Football (NBER Working Paper No. 24666), a study by Emilio Depetris-Chauvin, Ruben Durante, and Filipe R. Campante, finds that after African national teams won key matches in major international tournaments, many of the winning countries experienced a decline in the fraction of their citizens identifying with their ethnic group over the nation as a whole. They also saw an increase citizens' trust of other ethnicities and a distinct drop in political violence.

Prior studies have explored the efforts of countries struggling with internal divisions to forge common national identities through education, military service, or ambitious infrastructure projects. The new study looks at whether specific nation-unifying events and collective experiences can build trust and reduce political tensions.

The researchers focus on matches played in the Africa Cup of Nations (CAN) and FIFA World Cup qualifying and tournament competitions. In addition to information on the results of these matches, they compile data from Afrobarometer surveys gauging attitudes on a range of issues across the continent and from the Armed Conflict Location & Event Data Project. In all, they examine data from 47 Afrobarometer surveys covering 24 sub-Saharan nations. Their data sample spans the 2000–2015 period.

The researchers find that football victories were associated with heightened national identification. For example, in 2002, 30 percent of respondents in Mali emphasized their ethnic backgrounds over their nationality, while in 2013, after the Malian national team placed an impressive third in the CAN tournament, only 15 percent responded that way. While such statistics were suggestive, the time lags between surveys like these were deemed too large to permit definitive conclusions.

So the researchers then focused on surveys conducted only a few weeks before or a few weeks after high-profile international matches. They found that individuals interviewed after key national team victories were 4 percentage points less likely to report a strong sense of ethnic identity than those interviewed just before the match, a 20 percent decrease in the average probability of identifying by ethnicity. The attitudes persisted for at least 30 days after a major match. Post-victory respondents also were more likely to trust people of other ethnicities.

The effect was weaker in places where the state was more present in providing services. It was stronger in nations with greater ethnic diversity and where the national team reflected that diversity.