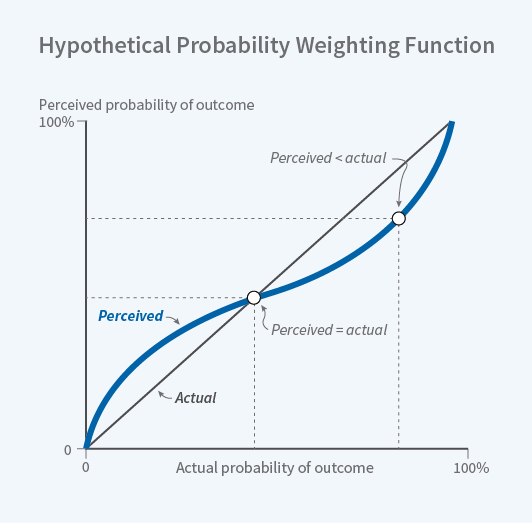 Many investors choose to hold stocks in individual firms, hoping to pick the 'the next Apple,' despite knowing that such investments are riskier than mutual funds.

Many individuals appear to assign probabilities to events that differ from the objective likelihood of these events taking place. Despite the demonstrably slim odds of winning the lottery, millions of hopeful people buy tickets every day. One explanation for this behavior is that many individuals substantially overstate their likelihood of winning. The tendency for individuals to over-weight low probability events, while also under-weighting high probability outcomes, is known as "probability weighting."

In Household Portfolio Under�diversification and Probability Weighting: Evidence from the Field (NBER Working Paper No. 24928), Stephen G. Dimmock, Roy Kouwenberg, Olivia S. Mitchell, and Kim Peijnenburg establish a relationship between the extent to which an individual "probability weights" and his or her stock market engagement. They find that probability weighting leads investors to under-diversify their stock holdings, hoping to win big when picking "the next Apple," but thereby taking on more risk than necessary and missing out on improved financial performance.

The researchers elicited individuals' probability-weighting preferences by administering a short, purpose-built, internet survey to several thousand respondents in the RAND Corporation's American Life Panel. The survey, which involved choosing between high-probability payouts for small sums of money and low-probability payouts for larger sums, allowed the researchers to calculate the guaranteed amount that an individual required to forego an opportunity for a more uncertain, but higher expected payout. Participants were playing with real money.

How do these probability weighting preferences translate to real-life decisions? The stronger someone's probability-weighting tendency, the more likely she or he is to bet the farm on individual stocks, rather than investing in a mutual fund that tracks the market. Among those who own individual stocks, 75 percent held five or fewer, and half held stocks in just one or two individual companies. Among those in the sample who participated in the stock market, the average share of their portfolio allocated to individual stocks was 45 percent. When high, this can be a tell-tale sign of under-diversification.

Under-diversification reduces investors' risk-adjusted returns relative to a fully diversified portfolio. The researchers estimate that the average stockholder's reliance on probability weighting reduces that investor's risk-adjusted portfolio income by about $2,500 per year.

When investigating the factors that affect stock ownership, the study controlled for age, income, financial wealth, and education, as well as factors more specifically related to financial decision-making, such as risk aversion, financial literacy, trust, optimism, and numeracy. There was no evidence that probability weighting was greater for individuals who were less intelligent or less educated, nor was it correlated with optimism.

Household Portfolio Underdiversification and Probability Weighting: Evidence from the Field