Building Wealth through the OregonSaves Program for Retirement Savings 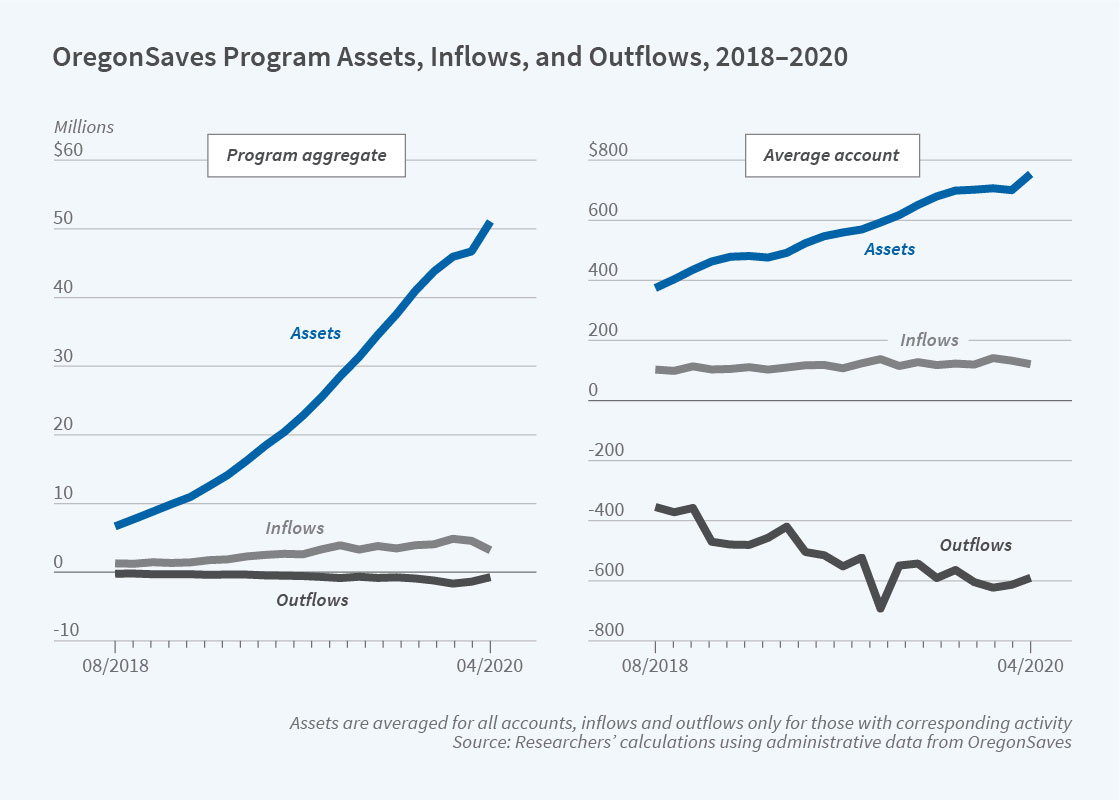 The state-sponsored automatic enrollment program facilitates saving among lower-wage workers without access to an employer’s retirement plan, but take-up is modest.

Roughly half of Americans working in the private sector lack access to a company-sponsored retirement plan. Typically, they work for smaller companies that pay lower-than-average earnings and have higher-than-average turnover.

To help these workers, Oregon has created a state-sponsored retirement program for employees of companies that do not offer such plans. This program — the first of its kind in the United States — automatically enrolls eligible workers and provides them with an account that resembles a Roth IRA.

Two years after the launch of OregonSaves, although a significant fraction of eligible workers have opted out of the plan, more than 67,700 individuals have accumulated balances of more than $50 million through the program.

Understanding why many workers are opting out is critical to any assessment of the program, according to researchers John Chalmers, Olivia S. Mitchell, Jonathan Reuter, and Mingli Zhong. In Auto-Enrollment Retirement Plans for the People: Choices and Outcomes in OregonSaves (NBER Working Paper 28469), they find that the program has meaningfully boosted savings, and identify several rational reasons for the high drop-out rate.

One of the main motivations for offering an automatic enrollment program is that many workers procrastinate about retirement savings. A 2014 survey found that only 22.1 percent of workers without access to an employee retirement plan had opened an individual retirement account (IRA), and only 7.6 percent were actively contributing to one.

The average account balance in OregonSaves is modest — $754 — and the average monthly inflow is $117. As accounts matured, the share of accounts with inflows fell from two-thirds in August 2018 to one-third in April 2020 at the onset of the pandemic. The researchers identify three factors that may explain the variation in take-up and contributions.

The first is search costs. Learning about and enrolling in an IRA represents a barrier to saving for many workers, especially those with low earnings. OregonSaves is likely to reduce the cost of finding and enrolling in a savings plan for workers who are likely to be less financially literate and less engaged in retirement planning, especially relative to workers with higher and more stable earnings. As of April 2020, 34.3 percent of the Oregon workers who were covered by the program had a positive account balance. This is broadly consistent with estimates of the marginal fraction of workers who are drawn into private retirement plans when those plans introduce auto-enrollment.

A second explanation for not participating in the saving program is that workers may not be able to afford to save for retirement because they cannot meet current expenses. Just under a third of participants opting out of OregonSaves offer this explanation for their decision. Some workers are likely to be better off paying current bills rather than trying to save for the future.

A third explanation for limited participation in OregonSaves is that employees may think additional retirement savings will not help them much, either because they don’t plan to retire or because they earn so little that Social Security benefits would typically cover in retirement most of what they earned while working. The share of earnings replaced by Social Security is progressive, and it can approach 80 percent for workers in the lowest quintile of the earnings distribution.

The researchers conclude that the OregonSaves experience highlights the challenges of encouraging saving among workers with low and volatile wages and high job turnover, but does suggest that meaningful savings are possible.

Auto-Enrollment Retirement Plans for the People: Choices and Outcomes in OregonSaves