Longer-Term Consequences of the Financial Crisis 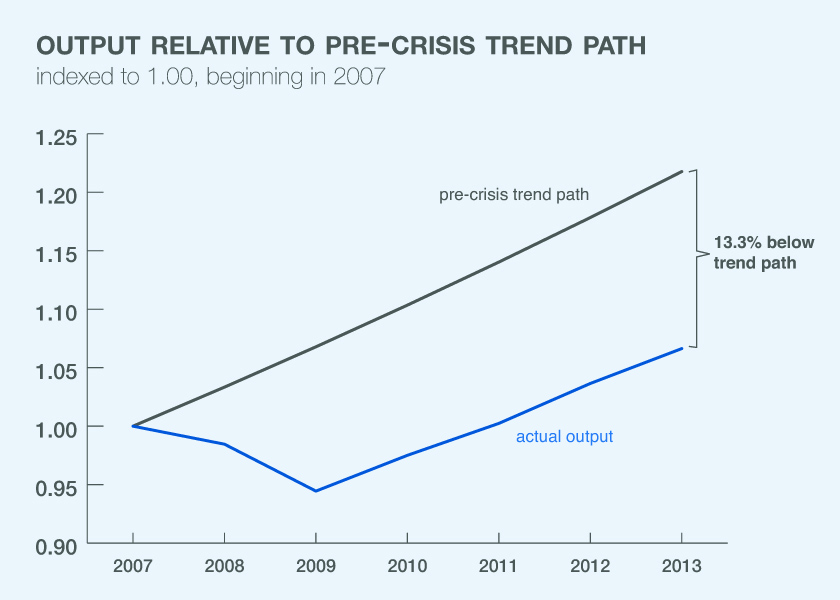 Analysis suggests that out of the 13 point output shortfall, the largest contributor was the depletion of the stock of plant and equipment, which accounted for 3.9 percentage points.

The financial crisis that began in 2008, and the ensuing Great Recession, cost the U.S. a substantial amount of output. In 2013, output was 13 percent below its trend path from 1990 through 2007. In Quantifying the Lasting Harm to the U.S. Economy from the Financial Crisis (NBER Working Paper No. 20183), Robert E. Hall starts from the widely accepted proposition that the financial crisis was the cause of the collapse in product and labor demand. He offers a complementary analysis of other aspects of the post-crisis economy, focusing on the durable effects of the crisis that a boost in product demand would not correct quickly. These effects are lost total factor productivity, lost investment resulting in a lower capital stock, and low labor-force participation lingering after job-creation incentives have returned to normal.

Hall observes that while the capital stock is responsible for the largest part of the output shortfall, it cannot respond immediately to a boost to product demand. He suggests that a boost in demand would probably trigger an accelerator response that would close some part of the shortfall in capital. In the longer run, the strong mean reversion in the historical capital/output ratio should work to close the entire gap.

Unemployment has fallen slowly during the recovery, reaching 1.3 percentage points above normal in 2013, and contributing 0.9 percentage points to the shortfall in output in that year. The return to normal has been slower than in previous post-recession episodes because the crisis shifted the composition of jobseekers toward those with low job-finding rates. People who lost jobs without hope of returning to the lost job are the most important group with long spells of unemployment. Mean reversion of unemployment is a well-established feature of the U.S. economy and there seems little reason to think that the crisis would affect the unemployment rate in any highly persistent way.

Labor-force participation fell substantially after the crisis, contributing 2.5 percentage points to the shortfall in output. The decline showed no sign of reverting as of 2013. The author believes that part of the participation decline is demographic and part reflects low job-finding rates, which had returned to close to normal in 2013. But an important part may be related to the large growth in beneficiaries of disability and food-stamp programs. Bulges in their enrollments appear to be persistent. Both programs place high taxes on earnings and so discourage labor-force participation among beneficiaries.

Quantifying the Lasting Harm to the U.S. Economy from the Financial Crisis