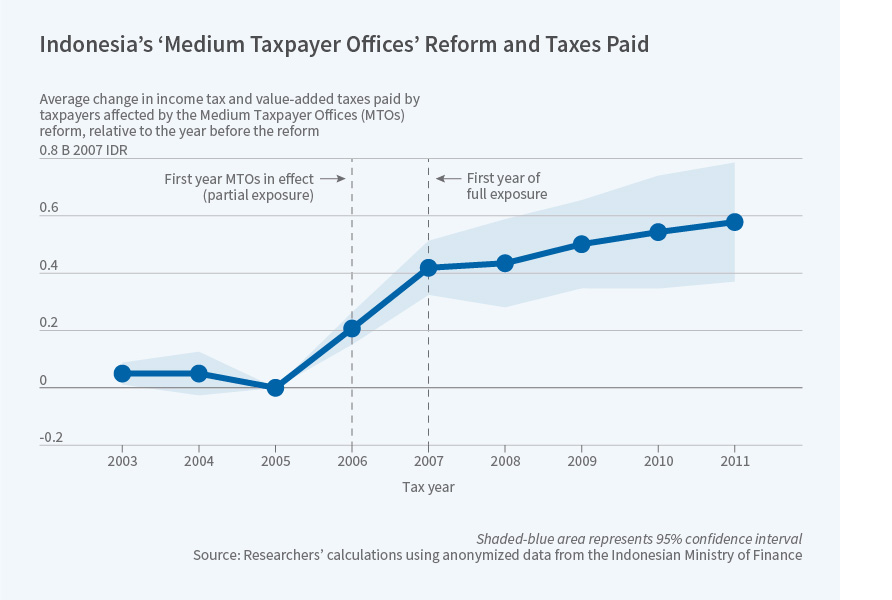 Most low-income countries collect between 10 and 20 percent of their GDP in tax revenue, in comparison to high-income countries’ average of nearly 40 percent. This may in part be due to fundamental characteristics of developing economies, such as their less sophisticated banking systems or prevalence of informal labor market relationships. These considerations suggest that there is little these nations can do to increase tax revenues.

In the first decade of this century, Indonesia established a number of Medium Taxpayer Offices (MTOs) and transferred responsibility for overseeing tax administration with respect to large corporations in each region with an MTO to that office. The MTOs had the same structure as the country’s regular tax offices, which are called Primary Taxpayer Offices (PTOs), but boasted higher staff-to-taxpayer ratios, allowing for better customer service and tax administration. The country’s several hundred largest taxpayers were serviced out of a central Large Taxpayer Office in Jakarta.

The researchers found that assignment to an MTO, as opposed to a PTO, increased tax revenue significantly — by 128 percent for the firms affected — at a cost of less than 1 percent of the increase in revenues. The increases were broad, occurring across corporate income taxes, VAT payments, and other kinds of tax payments. The MTO policy raised at least $4 billion from the firms it affected — just 4 percent of Indonesian corporations. The researchers also found that the establishment of the MTOs resulted in an increase in the reported number of permanent employees, and in reported wages, at the affected companies, perhaps because increased administration increased formalization.

The positive effect of MTOs on tax revenue increased over time. The researchers hypothesize that, before the advent of MTOs, overburdened tax workers may have focused more on larger corporations than on their smaller counterparts, effectively levying an additional “enforcement tax” on growth. The MTOs may have eliminated this tax, equalizing effective tax rates across different-sized firms.

The researchers also study a second tax reform: a 2009 change from a progressive corporate income tax rate to a flat rate of 28 percent with revenue-based discounts, and a 2010 tax cut of the flat rate to 25 percent. Reported taxable income increased as the tax rate declined: a 10 percent increase in the share of after-tax profits retained by firms — equivalent to a tax rate cut from 30 to 23 percent — is associated with an increase of about 6 percent in reported taxable income. This response is similar to the value found in many developed countries; it implies that Indonesia’s revenue-maximizing corporate tax rate is 56 percent.

Benchmarking the MTO reform against a counterfactual tax rate increase, the researchers find that the increased corporate income tax revenue from improvements in tax administration would be equivalent to raising the marginal corporate tax rate on affected firms by about 23 percentage points.

The findings indicate that tax administration improvements can be effective in raising revenue in developing nations. “Meaningfully large increases in tax revenue from medium-sized firms can be obtained through feasible administrative improvements in a relatively short period of time,” the researchers conclude.