Assessing the ACA’s Impact on Insurance Coverage, 4 Years On 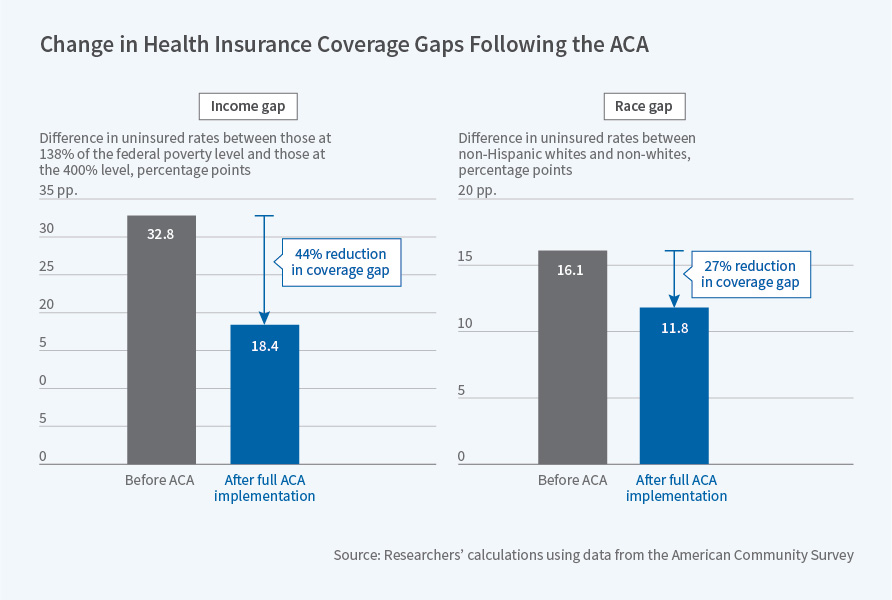 The health-care legislation has reduced the coverage gap between low-income and other citizens by 44 percent and the gap between non-whites and whites by 26.7 percent.

From 2014 to 2017, the ACA — which includes subsidized private insurance plans, state Medicaid expansion, and insurance market reforms — reduced the coverage gap across both age and income groups by 44 percent. It lowered the differences across racial groups by 27 percent, and that between single and married individuals by 45 percent, according to The Impact of the ACA on Insurance Coverage Disparities after Four Years (NBER Working Paper 26157).

The reduction in inter-group differences resulted from a combination of Medicaid expansion programs, growth in employer-sponsored insurance, and expansion of the private insurance market. For low-income citizens, the reduction was almost all due to Medicaid expansion. The researchers analyze changes in health insurance coverage using 2014-2017 data from the government-mandated American Community Survey (ACS), which includes more than 3 million observations per year as well as questions about socio-demographic characteristics, multiple categories of insurance coverage, and geographic identifiers.

The insurance coverage gap between whites and non-whites also shrank during this period. In 2013, non-whites were 16 percent more likely to be uninsured than whites: uninsured rates were 31 and 15 percent, respectively. After the ACA had been fully implemented, this gap narrowed by 4.3 percentage points, with gains for non-whites in all categories of coverage. The ACA also narrowed the gap between single individuals and married couples. In 2013, singles were much more likely to be uninsured (27 percent) than married couples (14 percent). This gap fell from 13 to 9 percent after the ACA was fully effective, largely because of expanded Medicaid coverage for single individuals.

In studying the four years since ACA implementation, the researchers find ongoing reductions in disparities, but the reductions are taking place at a slower rate. A reduction in private, employer-sponsored insurance coverage accounts for the majority of this reduction, but there is also a dip in reports of individually purchased coverage.