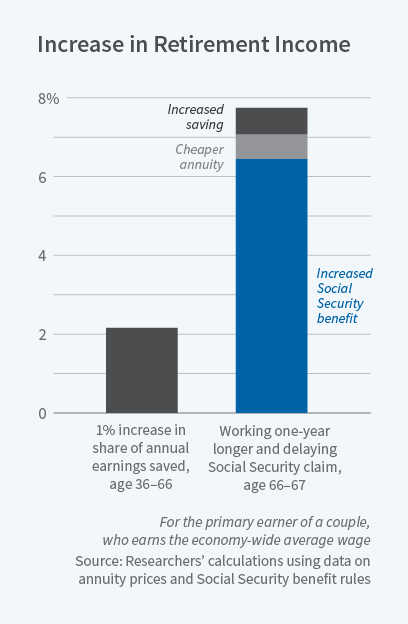 A 66-year-old worker who works one year longer and claims Social Security one year later sees a 7.75 percent rise in his inflation-adjusted retirement income, 83 percent of which comes from the rise in Social Security benefits.

Working a little longer, and postponing the start of Social Security benefits, can raise annual retirement income by as much as a modestly higher saving rate over several decades of work. That's the conclusion of a new study which finds that working three to six months longer boosts retirement income by as much as increasing retirement contributions by one percentage point over 30 years of employment. The finding applies to single adults and the primary earner of married couples, and across a broad range of earnings levels.

Older workers who are 10 years away from retirement and who decide to work one month longer at the end of their careers can get the same increase in retirement income as they can by adding one percentage point to their retirement saving rate over 10 years.

The findings are of special relevance to older workers, because the benefits of traditional retirement strategies — putting away more income toward savings or switching to a low-cost portfolio — diminish with age. By contrast, working longer and delaying the claiming of Social Security benefits are powerful ways for older workers to boost retirement income. "The results are unequivocal," write Gila Bronshtein, Jason Scott, John B. Shoven, and Sita N. Slavov, authors of The Power of Working Longer (NBER Working Paper No. 24226). "Primary earners of ages 62 to 69 can substantially increase their retirement standard of living by working longer. The longer work can be sustained, the higher the retirement standard of living."

There are several reasons working longer has such a positive effect on retirement income. First, additional months or years of work allow workers to contribute more to their retirement accounts. Second, delaying withdrawals from those accounts allows more time for them to grow. Third, waiting longer before buying an annuity means the annuity will be cheaper. The researchers assume that at retirement a worker buys an inflation-indexed joint survivor life annuity, in part because it harmonizes the benefits of private savings and Social Security benefits.

This Social Security effect is highly progressive. The lower one's income, the larger the gain in Social Security benefits from additional earnings. Thus, a lower wage worker needs to work only 2.1 months longer to equal the benefit of 30 years of saving an extra percentage point of income, while a higher wage earner has to work 4.4 months longer to get the same benefit.

The researchers observe that for a 62-year-old "working eight additional years will increase retirement income by at least 40 percent and above 100 percent for some individuals."

The Power of Working Longer