The Global Rise of Corporate Saving 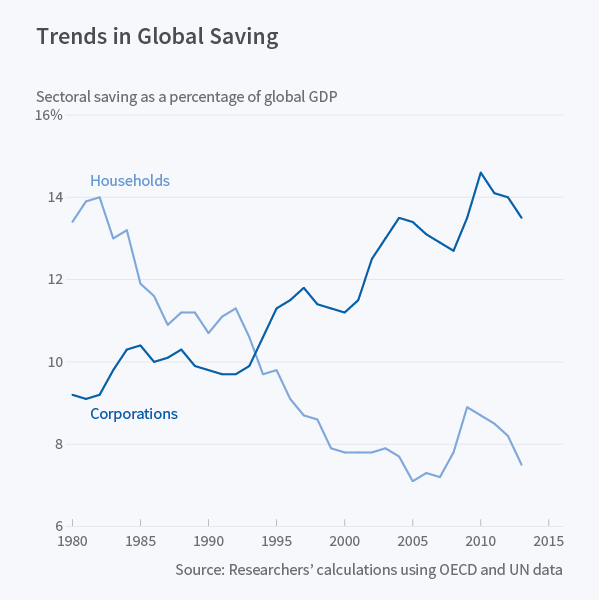 Falling labor shares and rising corporate profits have translated into higher corporate saving and turned the corporate sector from a net borrower to a net saver, while household saving has declined.

Since 1980, the global corporate sector has increased its saving rate and switched from being a net borrower to being a net lender to the rest of the economy. This change has occurred in most industries and in a majority of countries. In The Global Rise of Corporate Saving (NBER Working Paper 23133), Peter Chen, Loukas Karabarbounis, and Brent Neiman analyze this trend and document a parallel decline in household saving.

Corporate saving equals profits less dividend payments to shareholders; it is sometimes referred to as "retained earnings." Corporations can deploy their saving by investing in physical and intangible capital, accumulating cash reserves, repaying debt, or buying back shares. In the last two decades much of corporate net lending was used to accumulate cash. The use of net lending for share buybacks slowed after the financial crisis of 2008.

To investigate the rise in corporate saving, the researchers use national income accounts data from the United Nations and the Organisation for Economic Cooperation and Development, as well as firm-level data from Compustat. In the country-level data, they find that corporate saving as a share of global GDP rose by nearly 5 percent between 1980 and 2013. As a share of corporate gross value added, corporate saving increased in every region except Latin America and the Caribbean, and in all of the world's 10 largest economies.

The rise of corporate saving has coincided with a decline in labor compensation as a share of corporate gross value added. Thus the rise in corporate saving is closely tied to the rising share of capital income in advanced economies. The researchers find that the shares of major corporate expenses other than labor, such as taxes and interest payments, have been relatively stable over time. They note that as the labor share fell and corporate profits rose, firms did not sufficiently increase their dividends, which would have passed greater profits along to shareholders. Instead, dividends lagged the profit rise, resulting in greater corporate saving. 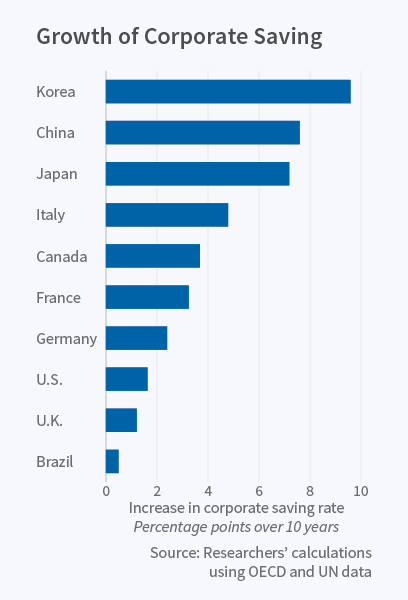 The researchers find no evidence that a decline in manufacturing, changes in the market power of specific firms or industries, or alterations in a particular country's financial practices were key drivers of the rise in corporate saving. They suggest that a number of changes in the global economy during the last three decades, notably falling real interest rates, declining prices for capital goods, and reductions in corporate taxes, could contribute to rising corporate profits and declining labor income. Rising markups on products sold by the corporate sector could have the same effect.

While corporate saving has risen, household saving has declined. As a share of global GDP, household saving dropped by nearly 6 percent between 1980 and 2013, when corporate saving increased by slightly less. This has resulted in a shift in the sources of finance for global investment. "Whereas in the early 1980s most of investment spending at the global level was funded by saving supplied by the household sector, by the 2010s nearly two-thirds...was funded by saving supplied by the corporate sector."

The Global Rise of Corporate Saving