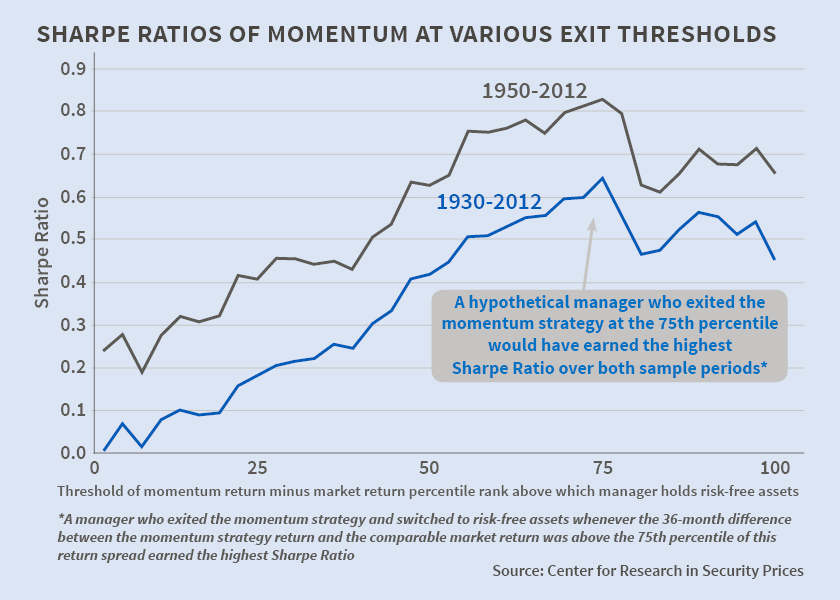 Even when the risk of a momentum 'crash' is high, managers still have incentives to commit other people's money to the momentum strategy.

During both periods, the momentum strategy generated positive, abnormal returns but exposed investors to occasional sharp losses or "crashes." The excess return associated with momentum trading averaged roughly 1 percent per month between 1927 and 2012, and 0.5 percent per month between 1867 and 1907. During both periods, however, momentum investors suffered periodic crashes. The authors find these momentum crashes were predictable. Investment managers could have increased the Sharpe Ratios of their portfolios by reducing exposure to momentum when it was more likely to crash. The fact that fund managers employing algorithmic momentum strategies suffer occasional dramatic losses suggests these managers either cannot anticipate momentum crashes or lack the incentives to take actions to avoid crashes.

The authors conjecture that those who possess the necessary trading skills to efficiently execute the momentum strategy typically manage other people's money. The authors use a theoretical model to analyze the incentives of money managers who collect a fee for investing third-party funds and compete for the funds of return chasing investors. They find that even at times when the likelihood of a momentum crash is high enough that managers would not commit their own funds to the momentum strategy, the competition for the funds of return-chasing investors and the incentives in compensation contracts combine to entice managers to keep other people' money invested in momentum.