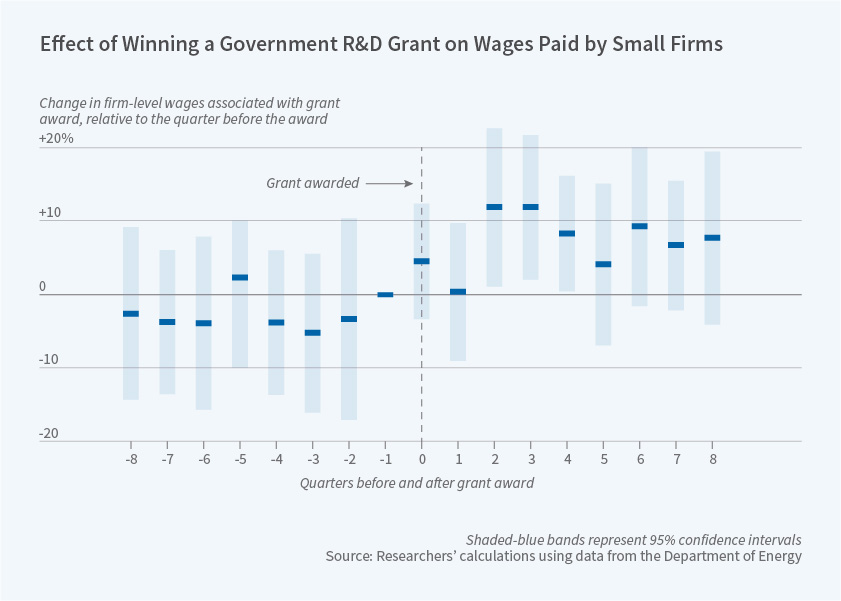 After a firm wins a grant, workers' wages rise substantially, which is consistent with their having accepted lower wages in the startup phase in the hope of higher pay later.

When small, private high-tech companies land a government research and development grant, they share the benefits of this windfall with their senior employees.

Workers who were with the company prior to its application for the grant received an average 16 percent raise in pay, according to Do Cash Windfalls Affect Wages? Evidence from R&D Grants to Small Firms (NBER Working Paper 26717). While this pay increase could reflect many factors, the explanation that best fits the data, according to researchers Sabrina T. Howell and J. David Brown, is that employees at small startups work for less than they might earn elsewhere in return for the implicit promise that if the startup succeeds and has more cash available at a later time, their wages will rise.

Such an effect is hard to discern in most settings because it is difficult to disentangle increases in workers' pay that reflect rent-sharing from increases that are due to productivity improvements. To get around these measurement problems, the study focuses on small high-tech firms that applied for US Department of Energy Small Business Innovation Research (SBIR) grants between 1995 and 2013. The $150,000 awards can be considered a cash flow "shock" because the recipient firms face no restrictions on how they spend the money. To establish a causal effect of these cash flow shocks, the researchers employ a regression discontinuity design, comparing firms around the cutoff for winning an award.

In the quarter following an SBIR award, they found that the average firm raised employee pay by about 9 percent. The effect was more muted at firms with more employees; averaged across all workers at the firms studied, the increase was a bit less than 4 percent. Importantly, the beneficiaries of the wage increases were workers who were at recipient firms before the grants were awarded, and the effect increased with worker tenure. Employees who joined a firm after the award did not receive resulting higher wages. The estimates of how long it took the typical firm to spend the entire grant on higher wages range between four and nine years.

The researchers consider a number of possible explanations for the pay raise for long-tenured workers, such as productivity growth, increased bargaining power among employees, incentive contracting, or backloaded wage contracts. This last one — long-term contract frameworks in which employees agree to work for less initially so they can reap big gains later — is most consistent with the data. Evidence for this explanation comes from a survey that the researchers sent to the principal investigators of the DOE grants, who were almost always the CEOs of the beneficiary firms. Of 99 responses, 55.6 percent confirmed they used backloaded contracts because of financial constraints, 21.2 percent said they didn't, and 23.2 percent did not directly answer the question.

"If the firm is financially constrained but can commit to long-term contracts, employees can offer financing to the firm," the researchers explain. "The worker initially agrees to be underpaid relative to some benchmark (such as his outside option) in exchange for a higher wage later when the firm's situation improves."

The researchers calculate that longtime employees not only received raises, but also collected a compensation premium for having accepted risky, lower-paying contracts initially. This deferred-compensation effect created more pay inequality within firms that received grants.

While the researchers acknowledge other potential explanations for the findings, these are less consistent with the data. For example, a federal grant boosts a firm's revenue and employment, which could result in higher productivity and hence higher wages. However, the bump in workers' pay happens in the first two quarters after the grant while productivity does not rise substantially for the first two years after the grant. Some might also suggest that workers gain bargaining power as their tenure grows, but the researchers argue that the receipt of a grant should not change a particular employee's bargaining power, yet it does affect wages.