Tighter Prescription Regulations Limited the Rise of Opioid Use 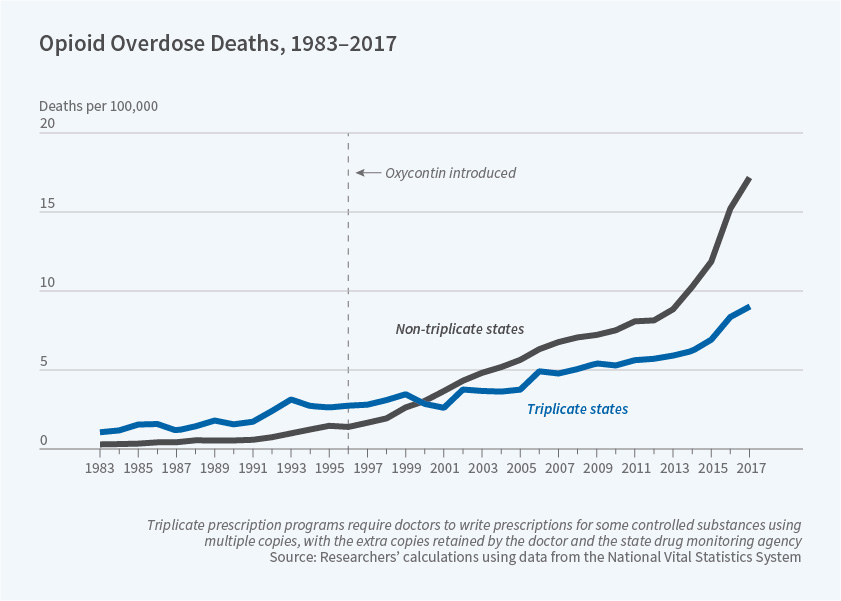 Five states that required doctors to fill out triplicate forms and report opioid prescriptions experienced slower growth in OxyContin use.

The opioid epidemic struck with different force in different states. The average per capita usage rate over the last two decades of OxyContin, a widely used prescription opioid that was introduced in 1996, was about 50 percent lower in California, Idaho, Illinois, New York, and Texas than in other states. In Origins of the Opioid Crisis and Its Enduring Impacts (NBER Working Paper 26500), Abby E. Alpert, William N. Evans, Ethan M.J. Lieber, and David Powell show how regulations in these states influenced the marketing strategy of Purdue Pharma, the maker of OxyContin.

The researchers conclude that what separated the five states which experienced less OxyContin use from the pack was “paperwork.” In 1996, the year the blockbuster painkiller came on the market, these states had the most stringent opioid regulations in the nation, known as triplicate prescription programs. Doctors were required to fill out triplicate prescription forms, sending a copy to the state drug monitoring agency and keeping one on file. While OxyContin prescriptions were lower in the triplicate states, use of other painkillers that were not subject to stringent regulations was just as high in triplicate states as in other states.

By 2004, all the triplicate states had dropped the triplicate regulations in favor of electronic record-keeping. However, Purdue appears to have continued to concentrate its marketing efforts elsewhere. Internal documents show that the company pushed its sales force to target the top OxyContin prescribers, thus reinforcing prior geographical trends. In 2013–16, total per capita payments to physicians for meals, travel and gifts linked to OxyContin promotion were between 42 and 72 percent higher in the non-triplicate states than in the five states that had triplicate policies in 1996.

The researchers conclude that the cross-state disparities in marketing efforts for OxyContin that originated in the era of triplicate prescriptions help to explain why residents of some states were shielded from the worst of the opioid crisis. Over the 1996–2017 period, non-triplicate states would have had an average of 36 percent fewer drug overdose deaths and 44 percent fewer opioid deaths if they had been triplicate states and experienced the concomitant lower level of marketing. This evidence suggests that the introduction and marketing of OxyContin played a significant role in the beginnings of the opioid crisis and continue to affect overdose rates even today.

Origins of the Opioid Crisis and Its Enduring Impacts