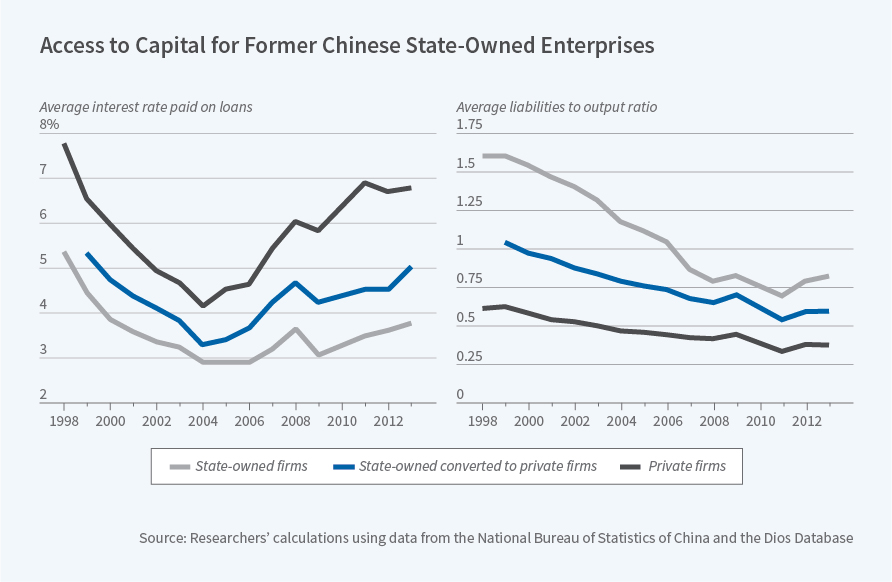 China's two-decade push to privatize state-owned enterprises (SOEs) has created better-performing companies, but former SOEs still benefit from some forms of state support. These firms receive low-interest loans and subsidies more frequently, and in greater quantity, than other enterprises.

In Can a Tiger Change Its Stripes? Reform of Chinese State-Owned Enterprises in the Penumbra of the State (NBER Working Paper 25475), Ann Harrison, Marshall Meyer, Peichun Wang, Linda Zhao, and Minyuan Zhao find that the benefits for former SOEs became more pronounced after the 2008 global financial crisis, when the Chinese government launched a trillion-dollar stimulus package.

Former SOEs, while more innovative and slightly more profitable than currently state-owned firms, remain less innovative and profitable than Chinese companies that have always been in the private sector. "The tiger can change its stripes," the researchers conclude. "However, the government's behavior seems to be sticky."

Using a dataset of all medium and large Chinese enterprises covering the period from 1998 to 2013, the researchers find that, before the 2008 crisis, the interest rate on loans to private firms was more than one percentage point higher than that on loans to former SOEs. Post-crisis, the difference widened to two percentage points. Current SOEs enjoyed an even lower interest rate than the former SOEs.

Former SOEs also occupied the middle ground with respect to government loans. Private firms received about 73 percent less in loans (as a share of output) than did SOEs, while privatized SOEs received 45 percent less. These disparities have narrowed over time.

The same held true for subsidies. In 1998, fewer than 15 percent of onetime SOEs got subsidies; by 2013, their share was 25 to 35 percent. For current SOEs, the comparable shares were 15 percent and 45 percent. Private enterprises, at 5 percent and 15 percent, were less likely to receive subsidies than either current or past SOEs. The size of the subsidies also varied. The average for private firms, per 1 million RMB of annual output, was 5,500 RMB less than for SOEs. Former SOEs received 3,600 RMB less than current SOEs.

All three kinds of companies improved return on assets (ROA) over the 1998-2013 period, but the size of improvement varied. Private firms started out with nearly a 10 percentage-point advantage in ROA over SOEs. The performance gap narrowed before 2004, but widened again after 2004. Former SOEs performed better than current SOEs, but only slightly. The researchers also find evidence that moving from complete state ownership to complete private ownership boosted a firm's total factor productivity by about 1.5 percent.

The researchers further conclude that the difference in borrowing costs and subsidies between former SOEs and firms that have always been private is associated with an additional 104 to 113 percent in ROA, and an additional 8.6 to 9.6 percent probability that a firm would file for a patent, when compared to just the effect of ownership change.

Can a Tiger Change Its Stripes? Reform of Chinese State-Owned Enterprises in the Penumbra of the State