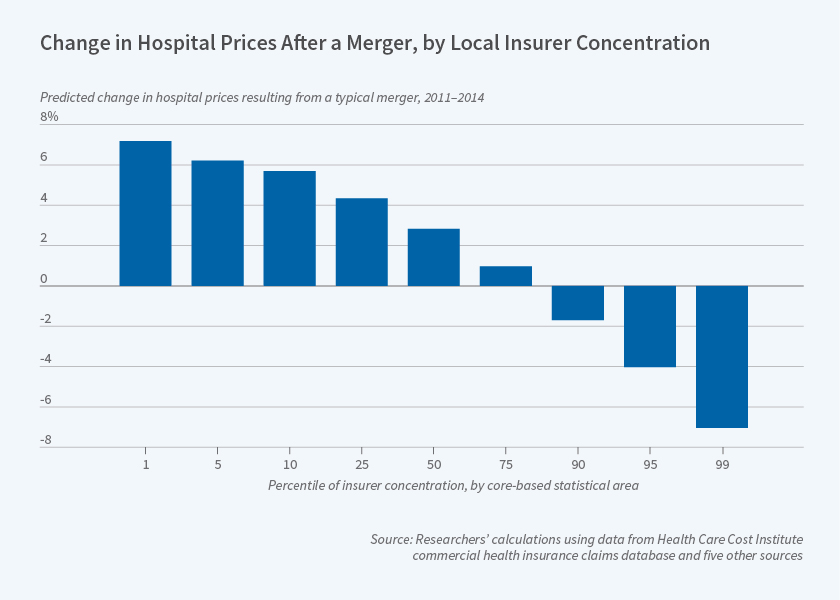 A typical hospital merger would raise the price of an average hospital stay by 4.3 percent in a market at the 25th percentile of insurer concentration, but by only 1 percent in one at the 75th percentile.

The ability of hospitals to raise prices after mergers is significantly blunted in markets with few health insurers, according to findings reported in Countervailing Market Power and Hospital Competition (NBER Working Paper 27005). Eric Barrette, Gautam Gowrisankaran, and Robert Town emphasize that it is essential to consider both the supply- and the demand-side characteristics of a market to make accurate projections of the price impact of potential mergers. They find that a typical hospital merger would raise prices four times as much in a market with many, competitive insurers as in one with a small number of large insurers.

Market power among both sellers (hospitals) and buyers (insurance companies) matters. The most advantageous position for a hospital in terms of maximizing revenue is to be the dominant player in a market with many insurers. It can use its strong bargaining position to command higher prices since insurers must include it in their plans if they are to remain competitive. However, if there are only a few dominant insurers, they can use their monopsony power to drive a better bargain with hospitals.

The researchers study the role of hospital and insurer competition using data on health care claims over the period 2011–14 from three national insurers: Aetna, Humana, and UnitedHealthcare. The dataset includes information on 40 million individuals under age 65 enrolled in employer-sponsored care. The researchers reviewed more than 2.25 million hospital admissions and calculated their average prices after adjusting for severity of condition and hospital characteristics.