Why Does the Debt-to-GDP Ratio Constrain Crisis Response? 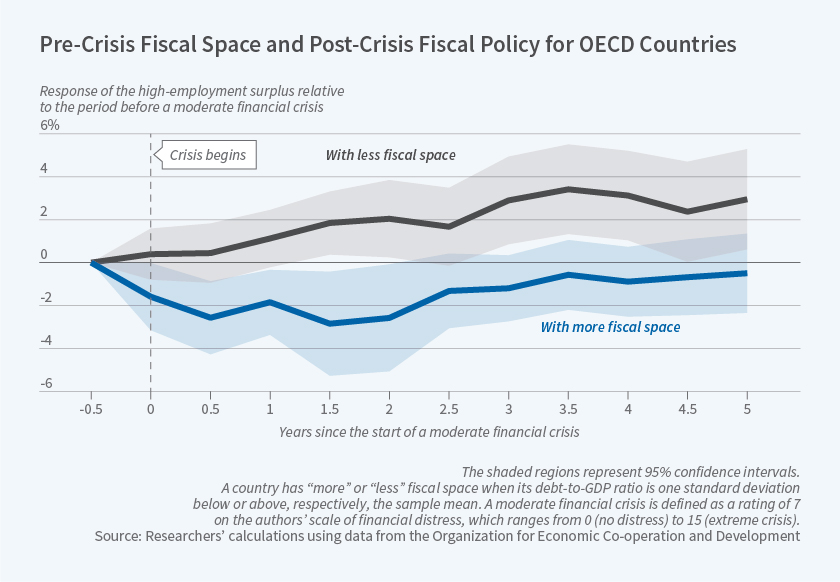 When a financial crisis hits, countries with a high debt-to-GDP ratio are less likely to pursue expansionary policy. Debt-related limits on market access are only part of the story.

Why do more indebted nations respond less aggressively to crises? One standard explanation is that they are unable to borrow in international credit markets at reasonable terms. In Fiscal Space and the Aftermath of Financial Crises: How It Matters and Why (NBER Working Paper 25768), Christina D. Romer and David H. Romer examine why the debt-to-GDP ratio is such a strong predictor of crisis response, and in particular the role of sovereign credit market access in damping the fiscal response.

A high debt ratio can make it difficult for a nation to access the capital market. When lenders fear they won't be repaid, they charge high rates to compensate for the risk, or they may refuse to lend to a country entirely. To test whether elevated debt ratios affect the policy response through a credit access channel, the researchers examine data on financial distress, debt ratios, and market access metrics such as interest rates on government debt, sovereign credit default swap spreads, and credit-agency ratings in 30 OECD countries from 1980 to 2017. They then study how important those factors were in predicting a country's fiscal response to economic turmoil.

The researchers complement their statistical findings with an analysis of crisis narratives drawn from the Economist Intelligence Unit (EIU), a forecasting and advisory service, for 22 episodes of high financial distress. In roughly half the cases of post-crisis fiscal austerity, the EIU indicated that policymakers' ideas were more important than market access, they find. They note, however, that the EIU also often cited market access as a significant influence in policymaker decisions — suggesting that while it is not the sole driver of policy responses to crises, it is nonetheless a factor.

Fiscal Space and the Aftermath of Financial Crises: How It Matters and Why