In a Financial Crisis, Room to Maneuver Is Worth a Lot 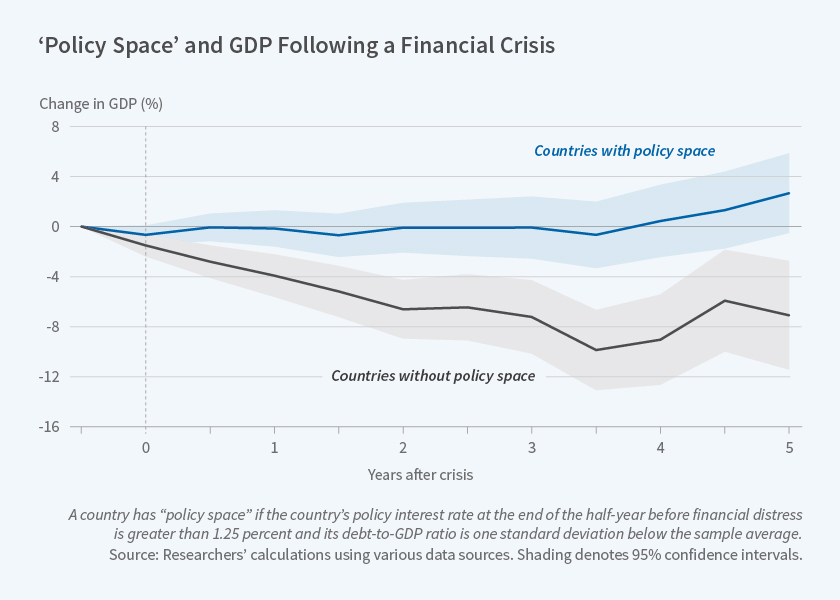 Countries with higher interest rates and lower debt-to-GDP ratios at the start of a financial crisis use monetary and fiscal policy more aggressively and recover more quickly.

Countries recovered from the global financial crisis of 2008 at very different rates. While Australia and South Korea were affected very little by the crisis, and output began growing in the United States and the United Kingdom within a year of the crisis, other nations — Portugal and Greece, for example — remained depressed for years. The same sort of heterogeneity can be found in earlier financial crises as well. Japan, for example, endured a "lost decade" of economic stagnation after the bursting of its asset and real estate bubbles in the early 1990s, while Norway recovered quickly from a banking crisis that occurred around the same time.

In Why Some Times Are Different: Macroeconomic Policy and the Aftermath of Financial Crises (NBER Working Paper No. 23931), Christina D. Romer and David H. Romer find that countries with more monetary and fiscal policy options at the onset of a crisis, namely those with interest rates well above the zero lower bound and with lower debt-to-GDP ratios, recover more quickly.

The researchers study the post-crisis economic performance of 24 advanced economies since 1967. They find that macroeconomic "policy space" has large effects. Countries that faced financial distress with substantial amounts of both monetary and fiscal policy space on average experienced output declines of less than 1 percent, while those that faced distress with neither type of space experienced average declines of almost 10 percent. Policy space also explains a significant portion of the variation in the rates at which financial systems heal after a financial crisis.

The finding that macroeconomic policy space explains a great deal of the variation in countries' post-crisis experiences suggests that policy-makers may find benefits to creating such space when they can. By drawing down their debt-to-GDP ratios during favorable economic times, fiscal policymakers can make it easier to cut taxes and raise spending in the event of a future financial crisis. Similarly, if makers of monetary policy raise their target inflation rate during periods of expansion, they can create room for interest rate reductions during crises.

Why Some Times Are Different: Macroeconomic Policy and the Aftermath of Financial Crises