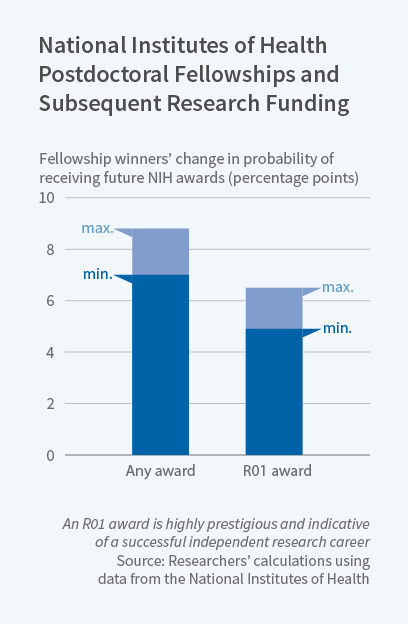 What works in supporting the pipeline of scientific talent development? The National Institutes of Health (NIH) has been asking that question for decades, and has funded undergraduate and graduate fellowships, research grants, and other programs designed to train and encourage promising young scientific researchers.

In The Impact of Postdoctoral Fellowships on a Future Independent Career in Federally Funded Biomedical Research (NBER Working Paper No. 24508), Misty L. Heggeness, Donna K. Ginther, Maria I. Larenas, and Frances D. Carter-Johnson explore the effects of the NIH's Ruth L. Kirschstein National Research Service Award (NRSA). This is a training program that supports undergraduate, graduate, and postdoctoral fellowships. The researchers focus on its post-graduate component, and conclude that this program has raised the number of scientists carrying out NIH-funded biomedical research.

In 2008, the NRSA spent about $751 million supporting research for 16,370 researchers, of whom 1,487, or about 9 percent, received so-called "F32" postdoctoral fellowships. Competition for the awards can be fierce.

Over the years, a number of studies have been conducted to measure the impact of the NRSA training programs. A perennial question is whether fellowship programs raise the likelihood of a career in science, or whether they simply keep Ph.D. recipients in the research field for a few years before they pursue other opportunities. The new study focuses specifically on the F32 program and how it affects the careers of fellowship recipients. The researchers consider in particular how fellowship receipt affects the number of NIH research grants that a researcher receives over the course of his or her career.

The study finds that receiving an NRSA fellowship increases the likelihood that a researcher will continue to be involved in NIH-funded research later in his or her career by between 6.3 and 8.2 percentage points. The probability that a researcher will subsequently receive an NIH-funded "R01" grant award, an indication of an independent research career, rises by between 4.6 and 6.1 percentage points.