For Women in Finance, an Unlevel Playing Field 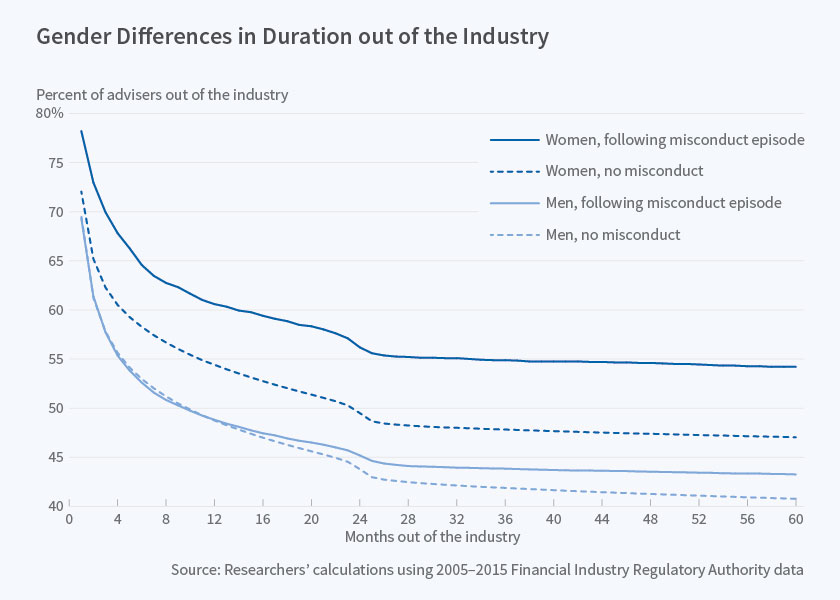 Gender disparities in the financial industry extend beyond discrimination in pay and hiring decisions to the severity of consequences for wrongdoing. This is the conclusion of a study by Mark L. Egan, Gregor Matvos, and Amit Seru, When Harry Fired Sally: The Double Standard in Punishing Misconduct (NBER Working Paper 23242). The researchers find that after a misconduct incident, women are 20 percent more likely than men to lose their jobs and 30 percent less likely to find new positions within one year.

The researchers analyze data from the Financial Industry Regulatory Authority covering 1.2 million registered financial advisers between 2005 and 2015. Women comprise 25 percent of the total financial adviser workforce and 16 percent of all owners and executives. Advisers are required to disclose all disputes and disciplinary actions, including everything from a customer complaint to a court proceeding. The researchers define "misconduct" as any disclosure involving fraud or wrongdoing. To measure whether female and male advisers are treated differently post-misconduct, the researchers compare advisers at the same firm, location, and point in time, and control for adviser experience and qualifications.

In a given year, 0.7 percent of men and 0.3 percent of women are associated with some form of misconduct.

After an incident of misconduct, 46 percent of men and 55 percent of women lose their jobs. This means that women are 20 per-cent more likely to suffer a job separation following misconduct.

The researchers conclude that discrimination by male employers is the most likely explanation for the observed differences in misconduct punishment. They note that misconduct complaints can be initiated by customers, regulators, or employers. While men receive more complaints than women on average, conditional on receiving a complaint, those against women are substantially more likely to be levied by an employer. Firms with more female executives, however, are less likely to show differences in the severity of punishment across men and women. When one-third or more of a firm's executive team is made up of women, there is no evidence of punishment differences between female and male advisers.

The study's findings cannot be explained by career interruptions, productivity differences, or adviser experience. Firms are also no more likely to fire women in distressed times, an indication that women are no less productive than men. The discrimination results — both the likelihood of loss of employment and the difficulty of finding a new job — are greatest in regions of the country with large wage gaps and labor force participation differences between men and women.

When Harry Fired Sally: The Double Standard in Punishing Misconduct