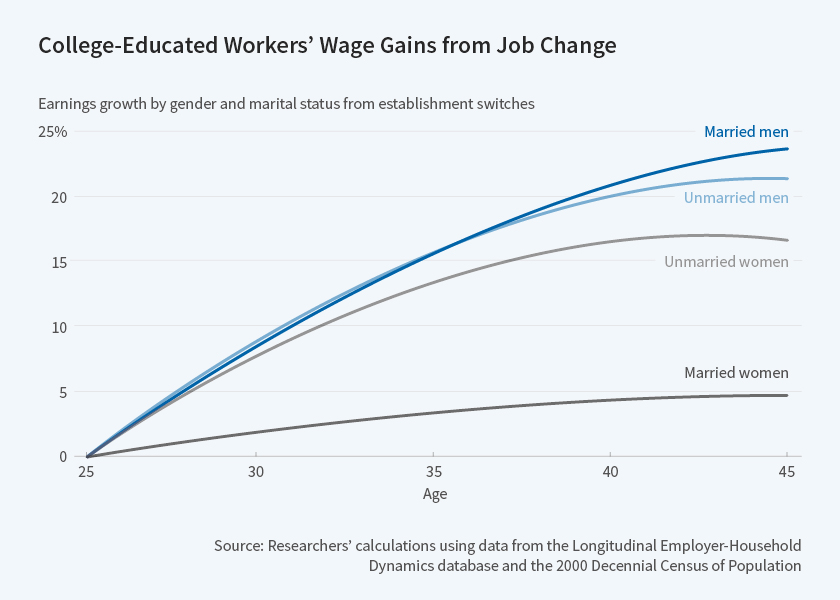 Earnings growth for married men with college degrees is substantially higher than for comparably qualified married women over the course of their prime working years.

Despite dramatic workforce gains by women in recent decades, a substantial gender earnings gap persists. In The Dynamics of Gender Earnings Differentials: Evidence from Establishment Data (NBER Working Paper 23381), Erling Barth, Sari Pekkala Kerr, and Claudia Olivetti find that this gap increases in magnitude over the course of men's and women's careers, particularly for those who are married. Their study explores various drivers of both the overall earnings gap and the manner in which it widens over time. Their analysis is based on an observation that there are earnings differences across establishments, and a key question is thus the extent to which the widening of the gender pay gap over time arises from differences in career advances within the same establishment versus differential gains from job-to-job moves across establishments over their careers.

The researchers point out that women may face both between- and within-establishment gaps. Due to family and caretaking obligations, women may be less able to put in the long hours required to score a big promotion at their employer, or to invest in the networking and job search activities that facilitate financially advantageous job changes. These effects may be compounded if employers believe that women are less likely to remain in the labor force over the long term, or if women are less likely to seek promotions and raises within and across firms in anticipation of needing more time flexibility or because of family location decisions in which the career of the primary earner, usually the husband, takes precedence.

Using data from the 2000 Decennial Census of the United States and the Longitudinal Employer-Household Dynamics (LEHD) database, the researchers study the earnings trajectories of workers aged 25-44 in relatively permanent work arrangements in large metropolitan areas between 1995 and 2008. Consistent with past research, they find a substantial gender earnings gap that widens with age among the workers in the sample. Earnings growth for men with college degrees is on average 50 percent higher than for comparably qualified women over the course of their prime working years. The gender difference in earnings growth is much smaller — only about 3 percentage points — for workers without a degree.

The opposite is true for workers with a college degree, for whom the within-establishment gap is large, sustained, and the main driver of the widening of the gender earnings gap. While the between- establishment gender gap also widens over time for college-educated men and women, it explains only 27 percent of the widening of the total gender wage gap for this group.

The researchers find that the between-establishment earnings gap arises almost entirely from the earnings trajectories of married workers. The development of the establishment pay premium looks about the same for never-married men, never-married women, and married men; married women, however, lag dramatically. The slowdown in their average earnings growth coincides with the traditional child-bearing years. The researchers suggest that this may indicate that the division of labor among married couples limits women's career choices and contributes to the widening of the overall gender earnings gap.

The Dynamics of Gender Earnings Differentials: Evidence from Establishment Data