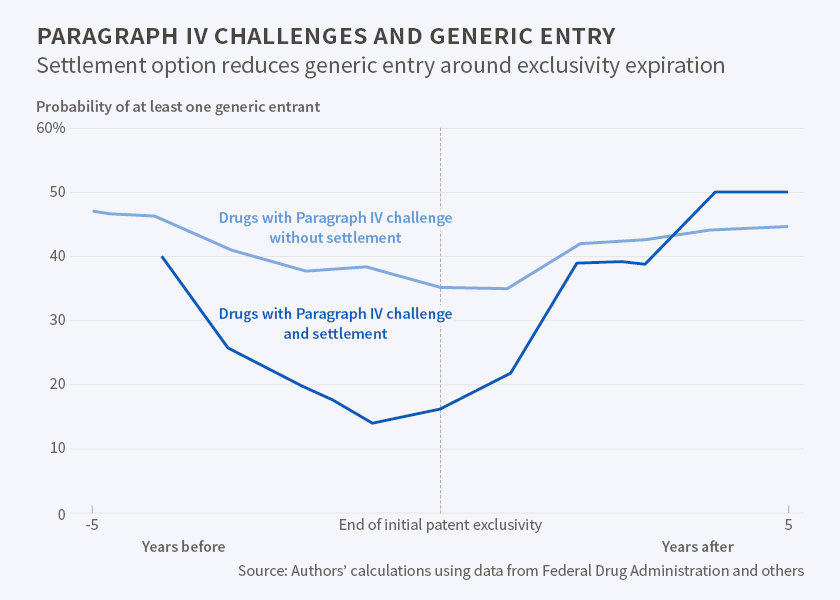 In an effort to promote generic entry and greater competition in the drug market, a section in the 1984 Hatch-Waxman Act—Paragraph IV—encourages makers of generic drugs to challenge pharmaceutical patents. These "Paragraph IV challenges" are on the rise, at least in part because the act and subsequent court rulings entitle a challenging firm to share in the patent holders' profits for the drug at issue for 180 days.

In some cases, the manufacturers of the patented products have settled with the potential generic entrant and agreed to share the profits from the patented product, sometimes for a period of years, if the potential entrant will delay production of a generic competitor. These so-called "pay for delay" settlements delay generic entry, and they have been labeled as collusive by the Federal Trade Commission. But how do they affect consumer welfare?

The researchers note that the Hatch-Waxman Act tried to strike a balance, encouraging the production of generic drugs to increase price competition while preserving enough profit for patent-holding drug companies so that they would continue to invest in expensive research and development (R&D). They find some evidence of this balance. If a maker of a generic drug initiates a Paragraph IV challenge and there is no settlement observed, the probability of a generic drug appearing in the marketplace rises by 68 percentage points over a baseline of 19 percent entry without a challenge.

If, however, the patent-holder challenges the action with a lawsuit and the parties settle, the challenge is associated with essentially no immediate increase in generic entry. And when the suit-and-counter-suit result is resolved by a settlement agreement, generic entry may be delayed by as long as five years.

"While this does not necessarily mean that settlements in Paragraph IV challenges really are collusive, the practical impact of settlements appears to be that they inflate prices and depress quantity for up to several years after the challenge, though in the longer term it appears they have little, if any, effect," the researchers report.

The researchers also investigate the potential impact of "pay to delay" settlements on the R&D spending of patent-holding firms. They compare the behavior of firms involved in three U.S. Circuit Court decisions which allowed settlements with the behavior of firms in two other decisions in which the judge ruled against the settlements. Manufacturers whose settlements were allowed boosted their R&D spending 0.5 percent, and 1.0 percent in the next year and subsequent years. Under the researchers' preferred assumptions about the link between R&D spending and future drug development, which they acknowledge are open to disagreement, they calculate that the elimination of settlements would slow the development of new drugs by less than one drug over a period of 25 years.