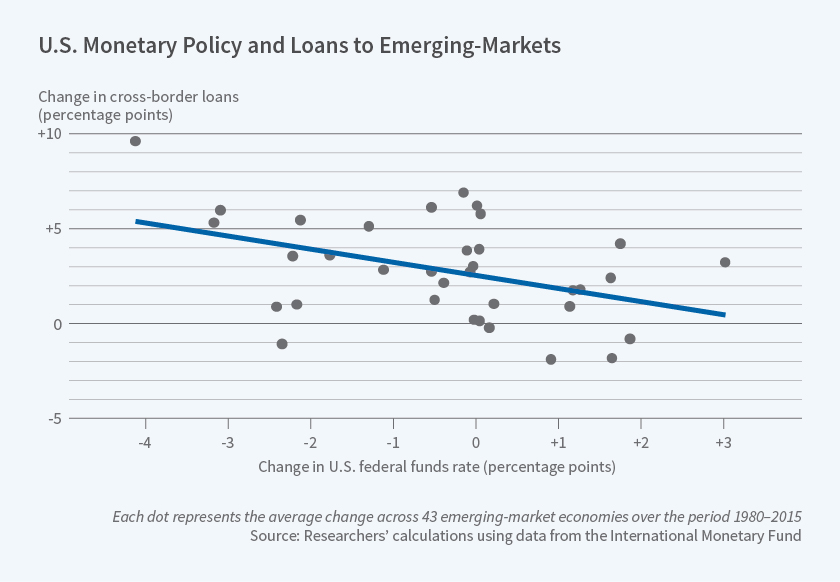 Reductions in the target interest rate are associated with sharp increases in dollar-denominated loan volumes in emerging markets relative to developed markets.

In U.S. Monetary Policy and Emerging Market Credit Cycles (NBER Working Paper 25185), Falk Bräuning and Victoria Ivashina find that when the Federal Reserve lowers U.S. interest rates, there is an increase in cross-border loan volumes by global banks, particularly with regard to emerging market economies. Studying the 1980-2015 period, even after accounting for differences in GDP growth, inflation, and forecast future economic performance, they find that a 4 percentage point cut in the Federal Reserve's target interest rate (a typical decrease during an easing cycle) increased loan volumes in emerging markets by 32 percent relative to the volumes in developed markets.

Using data from the Thomson Reuters DealScan database on global syndicated corporate loan issues, the researchers show that the result holds for non-U.S. banks and for banks with portfolios that have little exposure to the United States. Controlling for individual borrowers, their home countries, loan amounts, currency, maturity, interest rates, and lenders in the loan syndicate shows that the results apply to borrowers in non-tradable industries and those in countries having little trade linkage with the United States.

Loan volumes also respond to the yield spread — the difference between the 10-year U.S. Treasury yield and the federal funds rate. As the spread narrows and banks rebalance their lending portfolios toward risker assets, a 1 percent decrease in the U.S. spread increases emerging market economy lending volumes by about 16 percent. This effect was particularly relevant earlier this decade, when the Federal Reserve kept the federal funds rate at zero and eased monetary policy through unconventional measures that directly impacted long-term rates.

Monetary policy easing also is associated with higher loan volumes to riskier firms. In response to a 25 basis point decrease in the U.S. federal funds rate, firms with a 1 percentage point higher borrowing cost than their country average enjoy a 1 percent higher increase in loans than that afforded to average borrowers.