Some Taxpayers Forgo Benefits of Itemizing Due to Filing Costs 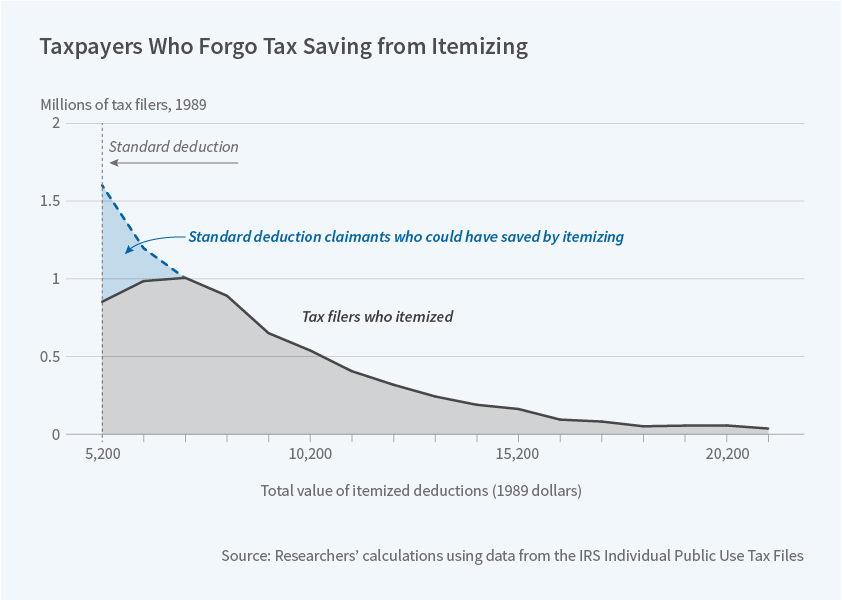 The total cost of taxpayers' compliance with the U.S. tax system may exceed 1 percent of GDP.

Many Americans complain about how much of their earnings each year go to taxes. But in How Taxing Is Tax Filing? Using Revealed Preferences to Estimate Compliance Costs (NBER Working Paper No. 23903), Youssef Benzarti shows that many taxpayers forgo tax savings in order to save the time, effort, and other costs required to itemize deductions on their returns. He estimates that the total cost of itemizing deductions rises with income, and that the total cost of tax filing, mostly the time spent filling out tax schedules and collecting receipts, is several hundred billion dollars.

Some taxpayers leave money on the table by opting for the standard deduction rather than spending time to itemize their deductions. Many explanations for this phenomenon have been offered, from taxpayers procrastinating on filing their returns to fearing audits if they itemize deductions to concluding that the cost in time and effort, including keeping receipts and filling out schedules, is not worth the savings. Among the most common itemized deductions in America are deductions for state and local income taxes, mortgage interest, property taxes, and charitable donations. The tax reform that was enacted in 2017 changed both deductions and the size of the standard deduction, so past patterns may no longer apply prospectively.

Benzarti estimates the perceived compliance costs to tax filers by computing whether there were "too few" taxpayers with itemized deductions slightly greater than the standard deduction threshold. Taxpayers who might save a few dollars by itemizing might decide that itemizing was not worth the effort; those who could save much larger amounts would presumably incur the cost of keeping records and itemizing their deductions. Using Internal Revenue Service data from 1980 through 2005, the researcher found just such a pattern of "missing taxpayers" above the standard deduction threshold.

He next examined tax years in which there had been significant reforms in U.S. tax codes, specifically increases in the size of standard deductions. He focused on 1988, when the standard deductions were increased from $2,540 to $3,000 for single filers and $3,760 to $5,000 for joint filers, and compared that year's data to the years before and after 1988. He found that the level of deductions at which there were too few itemizers also shifted between 1987 and 1988, supporting the view that these "missing taxpayers" are the result of choices, not chance variation in the distribution of deductible expenses.

By estimating the amount of tax savings that each taxpayer forwent, Benzarti computed what they must have perceived as the filing cost of itemized deductions. He concluded that these costs are large, and that they are higher for high-income households. This is consistent with the opportunity cost of time being higher for these households than for others. Aggregate compliance costs appear to have risen over time, from $150 billion in 1984 to $200 billion in 2006 (both figures in 2016 USD). This suggests that compliance costs are about 1.2 percent of GDP in recent years.

Benzarti concludes that compliance costs create a "tradeoff between requiring less forms and receipts (and therefore reducing filing costs) versus reducing evasion." He further notes that if compliance costs are high enough, "reducing reporting might be welfare improving even if it leads to higher evasion costs."