Bang for the R&D Buck Is in a Long, Steady Decline 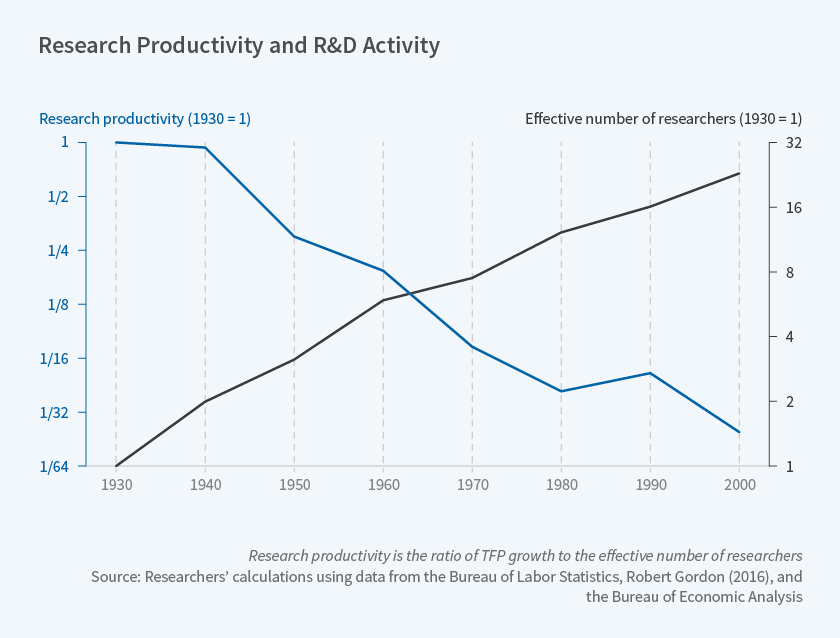 In Are Ideas Getting Harder to Find? (NBER Working Paper No. 23782), Nicholas Bloom, Charles I. Jones, John Van Reenen, and Michael Webb argue that, to maintain a given rate of economic growth, resources devoted to research must increase over time. They cite both aggregate evidence and measures of R&D productivity in specific industries, in particular computers, agriculture, and medicine.

They illustrate their finding by reference to Moore's Law, the observation by Intel co-founder Gordon Moore in 1965 that the density of computer chips was doubling every two years. "[B]ecause of declining research productivity, it is around 18 times harder today to generate the exponential growth behind Moore's Law than it was in 1971," the researchers calculate. Bang for the buck from research on computer chips has declined at an average annual rate of 6.8 percent, they find.

Similarly, ever-increasing R&D effort has been required to keep crop yields for corn, soybeans, cotton, and wheat increasing at an annual rate of 1.5 percent per year since 1960. The researchers estimate that research productivity has declined by 4 to 6 percent per year.

The medical field also shows diminishing returns to research dollars, but the results there are more mixed. Looking at the number of drugs approved by the Food and Drug Administration from 1970 through 2015 and the amount spent by the pharmaceutical industry on R&D, the researchers estimate that research productivity has fallen at an average annual rate of 3.5 percent, although the decline has slowed since 2007.

In aggregate, the researchers estimate that research productivity in the U.S. has declined by an average rate of 5.3 percent per year. "[J]ust to sustain constant growth in GDP per person, the U.S. must double the amount of research effort searching for new ideas every 13 years to offset the increased difﬁculty of ﬁnding new ideas," they conclude.

Declining research production may in part be explained by firms "shifting to ‘defensive’ R&D to protect their market positions." Further, they say that overall research productivity may have suffered because of a decline in basic research spending stemming from reductions in publicly funded research as a share of GDP.

In conclusion, the researchers note that their findings call into question prevailing economic growth projections. "The standard approach in recent years employs models that assume constant research productivity, in part because it is convenient and in part because the earlier literature has been interpreted as being inconclusive," they write. "We believe the empirical work we have presented speaks clearly against this assumption."

Are Ideas Getting Harder to Find?