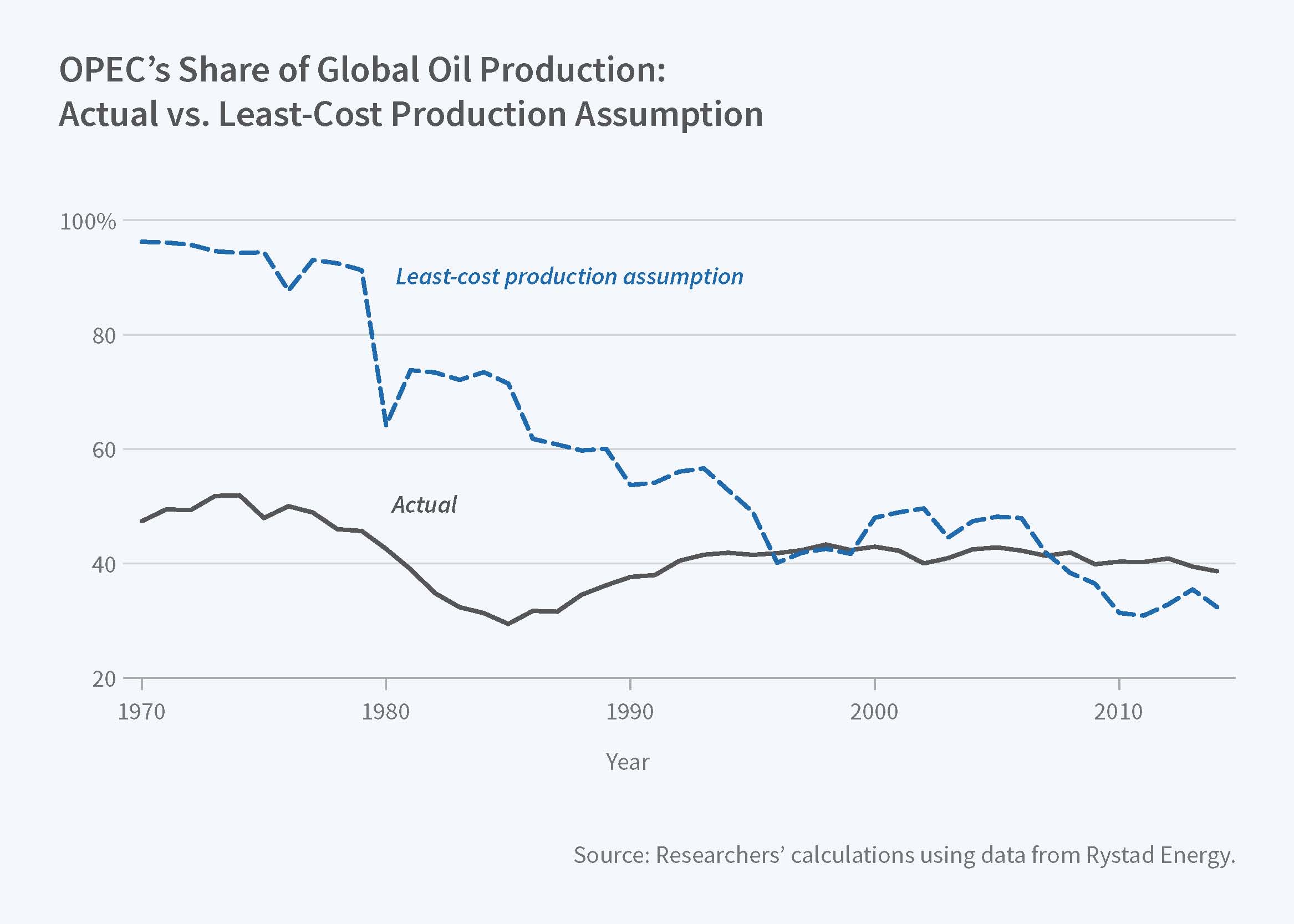 Because the lowest-cost oil producers are OPEC members, unrestrained production by cartel members would substantially reduce Russian and American shares of the world market.

Every microeconomics textbook explains that a business with market power can increase its profit by restricting output. In some cases, such quantity restrictions can lead to production being shifted to other firms. If those firms are relatively high-cost producers, this misallocation of production benefits the firm with market power, but means that society must spend more than it otherwise would to produce a given output.

In Market Power, Production (Mis)-Allocation, and OPEC (NBER Working Paper No. 23801), John Asker, Allan Collard-Wexler, and Jan De Loecker estimate that OPEC's exercise of market power to hold down output of petroleum shifted substantial amounts of oil production from low-cost fields to higher-cost ones, imposing extra oil production costs of $163 billion (in 2014 USD) on the global economy from 1970 through 2014.

The researchers use data from Rystad Energy to estimate the costs of production misallocation. These data include estimates of oil production and costs for 13,248 oil fields that were active at some point during the period 1970-2014.

Oil production costs vary by geologic formation. In 2014, these costs ranged from an average of $7 a barrel for the Ghawar field in Saudi Arabia, to $21 a barrel in the offshore Norwegian fields, to $51 a barrel in the Bakken shale in the United States.

OPEC members generally face much lower costs of production than other producers. In Saudi Arabia and Kuwait, production costs per barrel rarely exceeded $10 per barrel throughout the study period, and median costs were $5.40 a barrel. At the 95th percentile, the production cost was about $10 per barrel. By contrast, among producers outside the OPEC cartel, median costs were closer to $9.70 a barrel, with the 95th percentile at $28.20 per barrel. Thus, if OPEC withholds production, say by limiting output from its most expensive fields, this will induce production to expand in the more expensive fields in the rest of the world, resulting in misallocated production. If OPEC withholds production from its cheaper fields, such as those in Saudi Arabia, then the resulting cost increase is even higher.

The U.S. oil industry has been shaped, in large part, by the substitution of production away from cheap OPEC reserves toward the rest of the world. In 2005, shale accounted for just 24 million of the 2480 million barrels of oil produced in the U.S., or less than 1 percent. In 2014, 2039 million of the 4173 million barrels of oil produced — nearly half — were from shale. This expansion in higher-cost shale oil production was the primary driver behind an increase in the average cost per barrel of U.S. oil from $7.30 in 2002 to $20 in 2014. The researchers' analysis shows that this expansion in shale oil production would not have occurred if OPEC members had not restricted supply.

To estimate the effect of OPEC's market power, the researchers compare the cost of actual production each year with the cost of producing the same amount of oil using the lowest-cost fields, as would occur in a competitive market. They show that if production were allocated across countries to minimize production costs, then in 2014 the market share of the lower-production-cost Gulf countries would have increased from 25.8 to 74.4 percent. The Saudi Arabian share would increase to 28.1 percent and the Kuwaiti share to 12.5 percent, as opposed to current output shares of 13.3 and 3.0 percent. Production by non-OPEC, higher-cost producers would have fallen, with the U.S. share of the market falling from 13.2 to 1.3 percent and Russia falling from 14.4 to 4.7 percent.