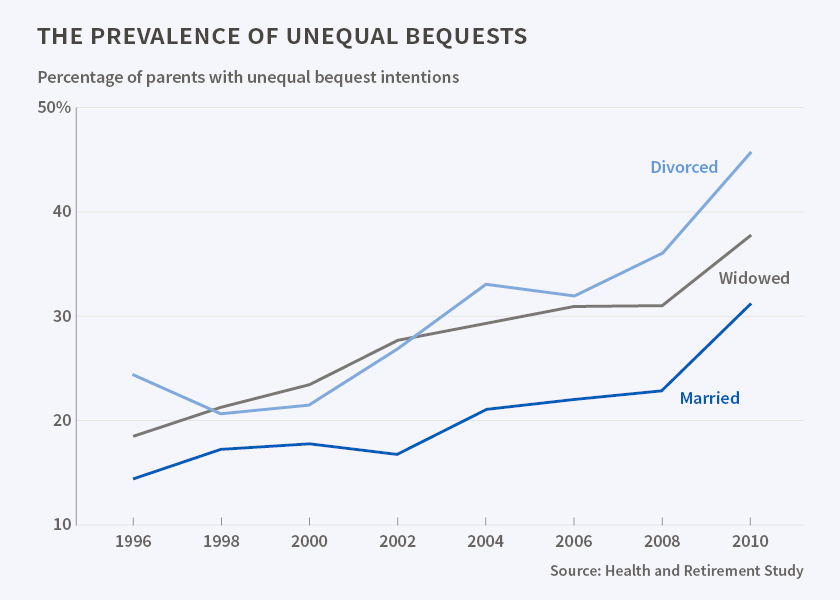 Among parents over 50 who reported having wills, the fraction treating their children unequally rose from 16 percent to 35 percent between 1995 and 2010.

Anyone counting on a certain share of an inheritance should be aware that in recent years, parents have become increasingly likely to divide their estates unequally.

In Unequal Bequests (NBER Working Paper 21692), Marco Francesconi, Robert A. Pollak, and Domenico Tabasso analyze a nationally representative sample of parents in the Health and Retirement Study from 1995 through 2010. The survey contacted more than 26,000 Americans, interviewing them at two-year intervals. Of these, 21,140 had more than one child, and 5,082 had both genetic children and stepchildren.

Among parents over 50 who reported having wills, the fraction treating their children unequally rose from 16 percent to 35 percent over this period. Parents with stepchildren were about 30 percentage points more likely to be planning unequal bequests than those with only genetic children. The overall trend away from equally divided bequests appears to be driven in part by the increasing prevalence of parents with stepchildren.

With regard to stepchildren, the researchers note several factors that are associated with an increase in the parents' intended estate share. If the relationship with a stepchild has lasted longer than seven to 10 years, the stepchild is as likely to be included in a will as a genetic child. This is the case regardless of the age of the child when the relationship began. If the stepparent reports having cared for the stepchild's children, the stepchild is about seven percentage points more likely to be included in the will. "This may reflect trust and bonding," the researchers write. They find that parents in blended families are more likely to include stepchildren in their wills if the predicted income of those children is less than that of their genetic offspring.

The researchers caution that two out of five survey respondents with children reported they had not made a will and "the presence of stepchildren does not affect the probability of writing a will." In the absence of a will, estates would be divided equally among genetic and adopted children, with no provision for stepchildren. The researchers suspect that the absence of wills "reflects the disutility of making wills (and contemplating death) rather than preferences for the distribution mandated by intestacy law."