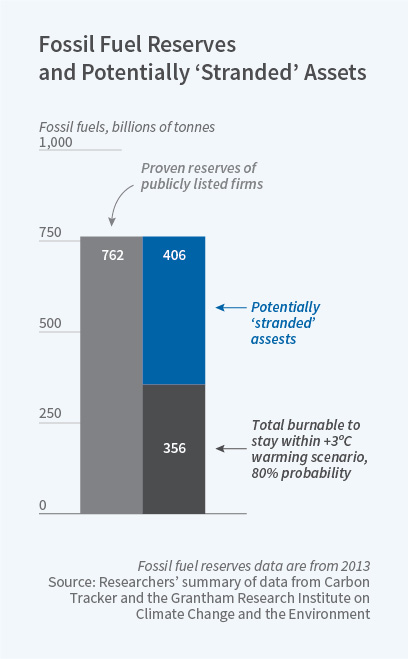 Capital markets place positive value on oil reserves that are already developed, while the growth of undeveloped reserves has a negative effect on oil firm value.

Although oil production has peaked and is now projected to be on a long-run global decline, the world is not running out of oil. Rather, particularly in North America, proved reserves and extraction have increased due to development of new production techniques such as fracking that overcome previously insurmountable technical challenges.

Total proved reserves are an important component of an oil firm’s value. In an era of growing demands for action to curb climate change, however, do capital markets reflect the possibility that some reserves may become “stranded” assets in the transition to a low-carbon economy? In Stranded Fossil Fuel Reserves and Firm Value (NBER Working Paper 26497), Christina Atanasova and Eduardo S. Schwartz examine the relationship between an oil firm’s growth in proved reserves and its value.

Assets become “stranded” if they become obsolete as a result of market, regulatory, or environmental changes. In the case of oil firms, both developed and undeveloped proved oil reserves are at risk of being stranded. Developed reserves can be extracted from existing wells, while undeveloped reserves are those which are located beneath undrilled sites or which are accessible from existing wells only with relatively large expenditure and time commitment.

Both developed and undeveloped reserves are assets for oil producing firms, and one might expect them both to have a positive — or at least a non-negative — effect on company value. The researchers study this question for 679 North American oil firms for the period 1999–2018. They focus on these producers because the markets for oil firms’ equities and many oil products are very liquid, and because North American producers face very low political risk and foreign exchange exposure. These firms are also subject to stringent regulation and monitoring, unlike firms in countries where markets are potentially fragmented, illiquid, or vulnerable to manipulation.

The researchers found that capital markets only valued reserves that were already developed, while growth of undeveloped reserves had a negative effect on an oil firm’s value. A one standard deviation increase in the growth of undeveloped, proved oil reserves was associated with a decline of more than 1 percent in Tobin’s q, the ratio of the firm’s market value to the replacement cost of its assets.