Quantifying the Impact of ECB Policies during the Debt Crisis 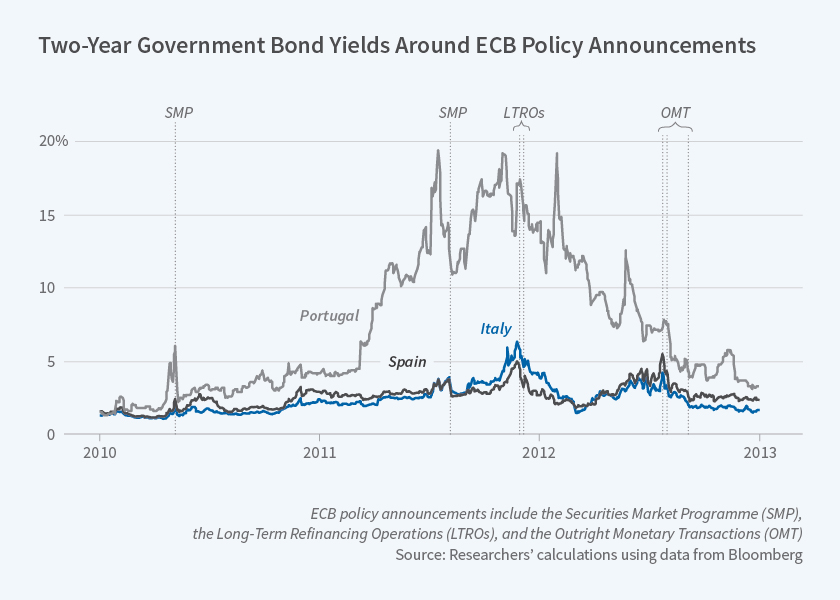 During the European debt crisis, several countries experienced large increases in government borrowing costs. The yields on government bonds for Ireland, Italy, Portugal, and Spain rose from around 2 percent in 2009 to between 7 and 20 percent in 2011, and Greek two-year bond yields rose to 200 percent in 2012. In response to this situation, the European Central Bank (ECB) enacted policies designed to reduce bond yields, including the Securities Markets Programme (SMP), Outright Monetary Transactions (OMT), and Long-Term Refinancing Operations (LTRO).

In ECB Policies Involving Government Bond Purchases: Impact and Channels (NBER Working Paper No. 23985), Arvind Krishnamurthy, Stefan Nagel, and Annette Vissing-Jorgensen examine the effects of these policies and quantify the effect of the SMP and OMT on bond yields. They also test for broader macroeconomic effects from these policies in the form of stock and corporate bond price increases both in distressed nations and in core eurozone countries.

The SMP, which started in May 2010, allowed the ECB to directly purchase government debt, with an initial focus on debt issued by Greece, Ireland, and Portugal. The program expanded to include Italy and Spain in 2011. In September 2012, the ECB initiated the OMT, which also allowed for government bond purchases but required that countries apply for the program and agree to undergo fiscal adjustments. The ECB also enacted three-year LTROs, an extension of a previous program that provided loans to banks. These loans were used, in part, to buy government debt.

The SMP and the OMT also had substantial impacts on the stock markets of the distressed countries and core eurozone countries. The SMP led to a 4 percent increase in stock values, and the OMT led to a 13 percent rise. Stock market returns following the LTRO were mixed — some countries saw positive returns; others experienced negative returns.