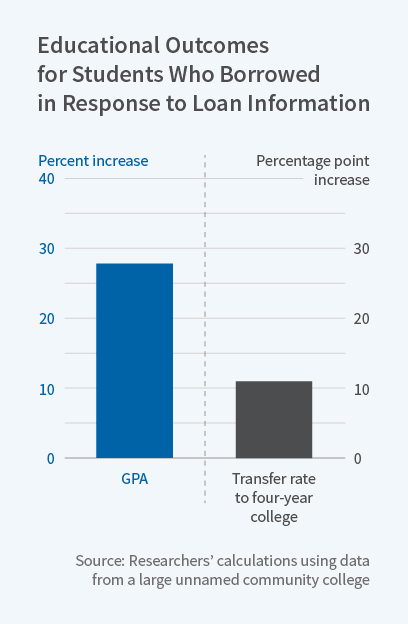 College students who were induced to borrow after receiving information on loan availability earned 3.7 more credits in an academic year and raised their grade point averages by 0.6 points.

Since 2000, undergraduate enrollment in the United States has risen by more than 30 percent, largely in two-year institutions such as community colleges. Student loan debt has also increased, reaching $1.4 trillion in 2017. In Student Loan Nudges: Experimental Evidence on Borrowing and Educational Attainment (NBER Working Paper No. 24060), Benjamin M. Marx and Lesley J. Turner conduct a field experiment at a community college to examine how nonbinding student loan "offers," which potentially provide information about a student's federal loan eligibility, impact loan take-up and academic attainment. They find that average credits earned and grade point averages (GPAs) both increase by 30 percent among students who borrowed as a result of the information.

Colleges are required to make federal loans available to all eligible students but can decide whether to include information about federal loan availability in students' financial aid packages. These nonbinding offers may affect loan take-up if students are unaware of federal lending options or if the offers anchor students' perceptions about how much to borrow.

The researchers ran a field experiment at a large community college to estimate the effects of such offers and subsequent student borrowing. Students were randomized into two groups: a treatment group, where students received a $3,500 to $4,500 loan "offer" in their financial aid award letter, and a control group, where the financial aid letters listed $0 in offered loans. The offers did not affect students' federal eligibility or borrowing requirements but potentially provided information about loan eligibility and available loan amounts.

The researchers examine the impact of the informational program on educational attainment and find that students who were induced to borrow by a nonzero loan offer earned 3.7 more credits in an academic year, on average. Furthermore, borrowers earned higher GPAs, by about 0.6 points. The researchers also find that the loan offer led to a 23 percent (12 percentage point) drop in reenrollment at the community college in the year following the experiment and an 11 percentage point increase in transfers to four-year public institutions, representing a 178 percent increase relative to the control group.

The increase in credits earned, at an average loan of $4,000, equates to 0.9 more credits per $1,000 lent. If students default on their loans at the community college's average rate, the researchers estimate a federal cost of $444 per $4,000 loan. Thus, each $1,000 spent results in 8.1 additional credits earned.

For the average student, the researchers estimate a $169 increase in annual earnings due to the attainment gains within the community college. They estimate that the increased enrollment at four-year schools further raises annual earnings by $198, for a total annual earnings increase of $370 as a result of the informational loan offer.

The researchers argue that the nonbinding loan offer works to counter misperceptions of loan availability and inattention to alternatives. Students in the treatment group are more likely to borrow across the spectrum of loan amounts, which suggests previous unawareness of federal loan availability. The researchers estimate that learning about loan availability explains at least 78 percent of the effect of this intervention. They find significant bunching of loan take-up at the offered amount, suggesting inattention to alternative amounts.

Across U.S. colleges, five million students attend schools that do not include loan offers in their financial aid packages. The researchers note that this indicates potential for attainment gains on a broad scale.