Evaluating the US Dollar's Outsized Role in World Trade 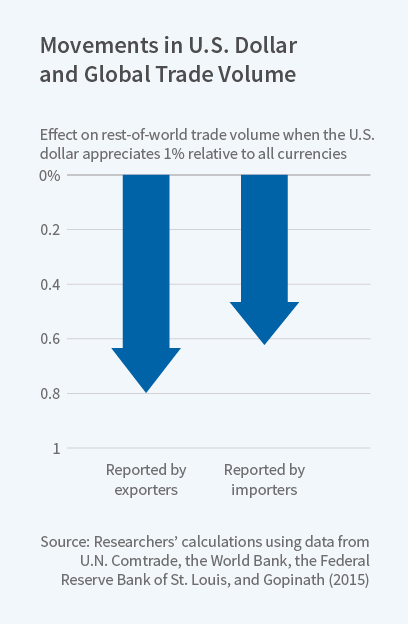 Recognizing that many goods are priced in dollars affects estimates of exchange rate pass-through and the elasticity of trade with respect to the exchange rate.

Fluctuations in the dollar reverberate through global trade, and even affect transactions that do not involve the United States.

Because of the prevalence of invoice pricing in dollars, changes in the value of the dollar can have a larger impact on the trade flows between two non-U.S. nations involved in bilateral trade than changes in their own currencies.

In Global Trade and the Dollar (NBER Working Paper No. 23988), Emine Boz, Gita Gopinath, and Mikkel Plagborg-Møller analyze annual trade price and volume data for 55 countries from 1989-2015. As of 2015, the sample studied accounted for 91 percent of the world's total exports and imports of goods.

The researchers focus on estimates of the degree of price pass-through and the elasticity of trade with respect to the exchange rate.

When they do not control for fluctuations in the value of the dollar, they find that a 10 percent depreciation in the currency of an importing nation relative to that of its exporting counterpart raises the importer's prices by 8 percent, suggesting an almost complete pass-through. Adding the exchange rate of the importing country relative to the dollar dramatically reduces the pass-through estimate, to 3.2 percent. The dollar, by comparison, becomes the dominant factor with a pass-through estimate of 6.6 percent into import prices. The researchers also calculate that a 10 percentage point rise in the share of imports invoiced in dollars would increase the dollar pass-through by 2 to 3.5 percentage points.

When the dollar's value changes, it affects the total volume of global trade, even among trading partners that do not include the United States. A 1 percent appreciation of the dollar against all other currencies is associated with a 0.6 to 0.8 percent decline in total trade among countries in the rest of the world.

Global Trade and the Dollar