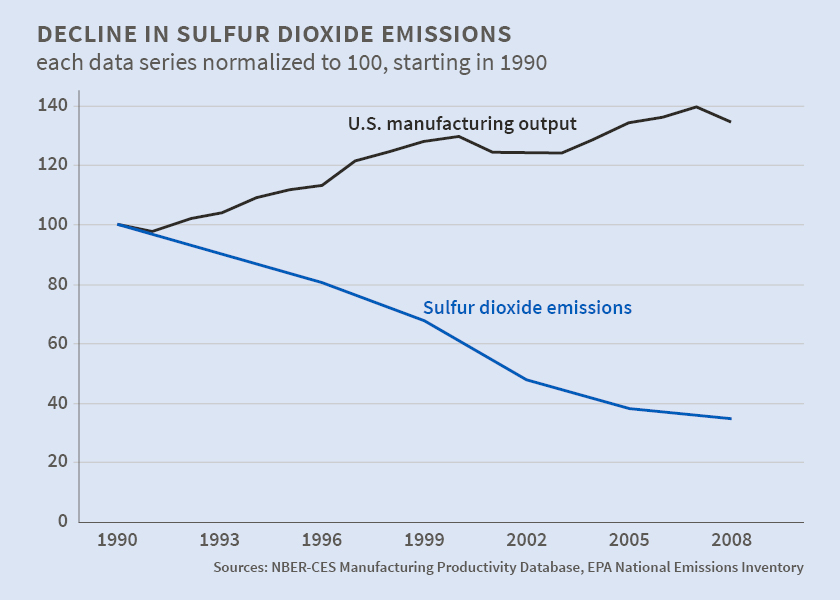 Direct measurement of the technique effect shows that improvements in production techniques account for almost all of the decline in emissions.

From 1990 to 2008, U.S. and E.U. manufacturing output grew while pollution emitted by manufacturers fell. One explanation for this trend is that developed countries have been offshoring pollution-intensive parts of their manufacturing sectors. Another is that manufacturing has shifted toward the use of cleaner production processes - the "technique effect." This suggests that by using cleaner fuels, less energy-intensive processes, recycling, and pollution-control technologies, the U.S. and Europe now can produce the same volume of goods as before in a less pollution-intensive manner. While the latter explanation has gained traction over time, direct measurements of the technique effect have been missing.

In A Direct Estimate of the Technique Effect: Changes in the Pollution Intensity of U.S. Manufacturing 1990-2008 (NBER Working Paper No. 20399), Arik Levinson uses data on changes in the pollution intensity of 400 U.S. manufacturing industries over time to estimate the technique effect. He creates an index of technological change that compares actual pollution levels to what pollution levels would have been if pollution intensities were allowed to change over time but manufacturing output and the mix of goods produced had remained fixed at 1990 levels. This approach represents a substantial difference from previous studies that measured the technique effect indirectly as a residual, the component of the reduction in the pollution-to-output ratio that remained after other explanations that could be quantified had been taken into account.

Levinson's results show that the index drops nearly as fast as actual emissions, implying that nearly all of the cleanup of U.S. manufacturing can be explained by technological changes within industries, rather than shifting output among industries. While prior studies, using indirect approaches, suggested that the technique effect accounted for around 88 percent of the U.S. cleanup, Levinson's direct calculations place the figure at around 92 percent. The findings therefore corroborate the previous studies as to the importance of the technique effect.

The results also indicate that the manufacturing industries that experienced the largest declines in their pollution-to-output ratios expanded as a share of the total manufacturing sector. Levinson notes that this pattern suggests that if the cleanup was the result of environmental regulation, then these regulations did not lead to the offshoring of polluting industries but rather to emission reductions on an industry-by-industry basis. Second, he notes that it may be possible to replicate the U.S. cleanup in other nations since the same techniques that were adopted in the U.S. could be available elsewhere.

A Direct Estimate of the Technique Effect: Changes in the Pollution Intensity of US Manufacturing 1990 - 2008