Microfinance Spurs Sustained Growth — but Not for Everyone 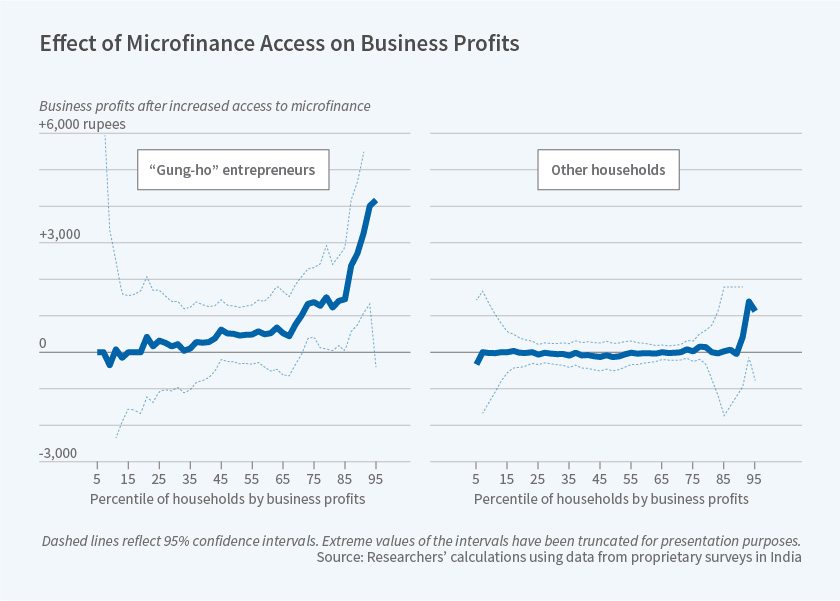 For low-income micro-entrepreneurs who had businesses before they received microcredit, credit access raised investment, labor input, and revenues.

Microcredit programs make small loans to low-income individuals who lack access to traditional financial services. In Can Microfinance Unlock a Poverty Trap for Some Entrepreneurs? (NBER Working Paper 26346), Abhijit Banerjee, Emily Breza, Esther Duflo, and Cynthia Kinnan analyze the long-term effects of a microcredit program on households in Hyderabad, India. They find that access to the program had strong positive effects for households that were already engaged in what they call "gung-ho" entrepreneurship, and almost no effect for others. They conclude that recognizing heterogeneity in entrepreneurial ability is important for assessing the impact of microcredit programs.

The researchers rely on a new wave of data collected from households in Hyderabad, where the microfinance lender Spandana began working in 52 neighborhoods in 2006. Those neighborhoods, the treatment neighborhoods, were paired with control neighborhoods, which became eligible for microcredit in 2008. Households were surveyed between mid-2007 and early 2008, again in mid-2010, and finally in mid-2012. In late 2010, the government of the Indian state of Andhra Pradesh passed an emergency law regulating microfinance activities. This essentially brought lending to a halt. The results of the 2012 follow-up survey, which encompassed 5,744 households, measured the effects of the span of past exposure to microfinance in a setting in which microfinance is no longer available.

The researchers observe that how a household responded to the availability of small loans depended on its prior experience with entrepreneurship and on its wealth. Some of those who received loans seized the opportunity to hire an employee or make an important investment in equipment. Others used the loan to pay back outstanding loans from informal lenders, or to become "reluctant entrepreneurs" at a less ambitious scale. "[W]ithin the same sector," the researchers find, "poor (micro)entrepreneurs use technologies that are inefficient but cheap, while wealthier entrepreneurs use technologies that are more efficient but have high up-front costs."

Borrowers who had existing businesses experienced noticeable impacts after accessing microcredit in 2006, as measured by asset stocks, self-employment hours, revenues, and profits. Business expenses increased by 80 percent for gung-ho entrepreneurs who received microcredit, self-employment hours rose by 20 percent, and revenues more than doubled relative to existing entrepreneurs in control areas who did not have access to microcredit. The impacts of the temporary influx of cheaper credit persisted even after the entire state lost access to further microcredit due to the 2010 law.

Spandana entered Hyderabad over a period of 13 months. This allowed the researchers to identify businesses that opened at the same time in treatment and control neighborhoods and to compare whether the treatment effect was larger for businesses that had opened before loans from Spandana were available, or for businesses that were launched after Spandana was already operating. This comparison suggested that gung-ho entrepreneurs — those who had launched their businesses before Spandana was operating in their market — showed large treatment effects from accessing microcredit. This appeared to be because these business owners were more motivated or were better at running a business, not because they were more experienced or older. The gung-ho entrepreneurs were more likely to borrow money from other lenders, in addition to Spandana, to support their businesses, and they were about 6 percentage points more likely to have multiple employees.

The findings suggest that the majority of business growth associated with microcredit comes from a small share of firms. Their growth generates employment opportunities for others who might otherwise become "reluctant" entrepreneurs.

Can Microfinance Unlock a Poverty Trap for Some Entrepreneurs?