The Effects of For-Profit Colleges on Student Outcomes and Debt 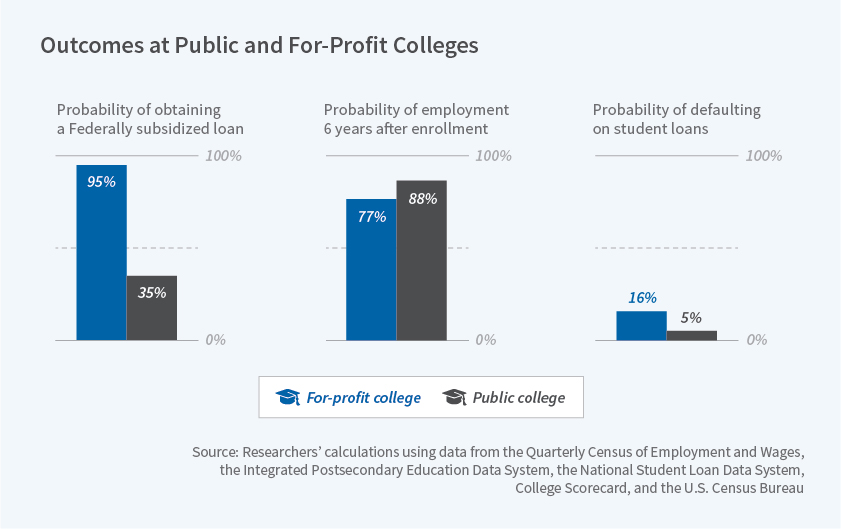 Those who opt for for-profit schools over similarly selective public colleges borrow more, default at a higher rate, and have lower likelihood of employment.

An increasing number of students are attending for-profit colleges. These institutions receive substantial public funds through federal financial aid programs. About 17 percent of Pell grants and Stafford loans went to for-profit undergraduate students in 2017, although those schools awarded just 7.6 percent of all associate and bachelor's degrees the year prior. Those who attend for-profit schools realize worse labor market outcomes and experience higher student-loan defaults than their peers who attend public institutions.

In How Does For-Profit College Attendance Affect Student Loans, Defaults, and Labor Market Outcomes? (NBER Working Paper No. 25042), Luis Armona, Rajashri Chakrabarti, and Michael F. Lovenheim investigate whether these outcomes can be ascribed to attendance at for-profit institutions or are the result of the fact that for-profits educate disproportionate numbers of disadvantaged students. They do this by taking advantage of the interaction between labor demand shocks that generate changes in demand for college and geographic variation in the latent supply of for-profit colleges.

For example, in economic downturns, when demand for labor falls, it is common for people to pursue higher education or job retraining. Many potential students are faced with two choices: non-selective public institutions, such as area community colleges, or for-profit colleges, which are also typically non-selective. When there are more for-profit colleges in a given area, the likelihood that a potential student will enroll in one is higher.

The researchers studied areas that experienced similar changes in the demand for labor — including both positive and negative shocks — between 2000 and 2014, but which differed in the share of for-profit institutions among their colleges and universities at baseline. Their analysis is conducted using data on 815 core-based statistical areas (CBSAs), which are geographic areas that consist of one or more counties associated with an urban area. CBSAs that had only for-profit institutions were excluded. The researchers studied two distinct time periods: from 2000 to 2008, when the labor market was generally strong, and 2008 to 2014, a period that encompasses the Great Recession. They note that labor market conditions vary between CBSAs in any given year.

To establish how local labor conditions over a three-year period affected residents' decisions to return to school, the researchers relate each year's enrollment figures to a rolling labor demand shock measure calculated over the three previous years. To establish a supply baseline, they calculate the proportion of for-profit schools in each CBSA in 2000.

The researchers find that for-profit schools put students at greater financial risk than their public counterparts. They examine the impact of attending a for-profit institution on various outcomes and find higher loan amounts ($6,428 in additional loans for students at two-year schools, $3,356 for four-year students), lower likelihood of employment, and higher default rates among students at both four-year and two-year for-profit institutions, relative to their peers who went to similarly selective public schools. Students at two-year for-profit institutions were more likely to obtain a degree than their publicly educated peers, but they were less likely to be employed six years after graduation. The researchers conclude that "Students could earn more, take on less debt, default at lower rates, and be more likely to graduate if they attended a public four-year institution."