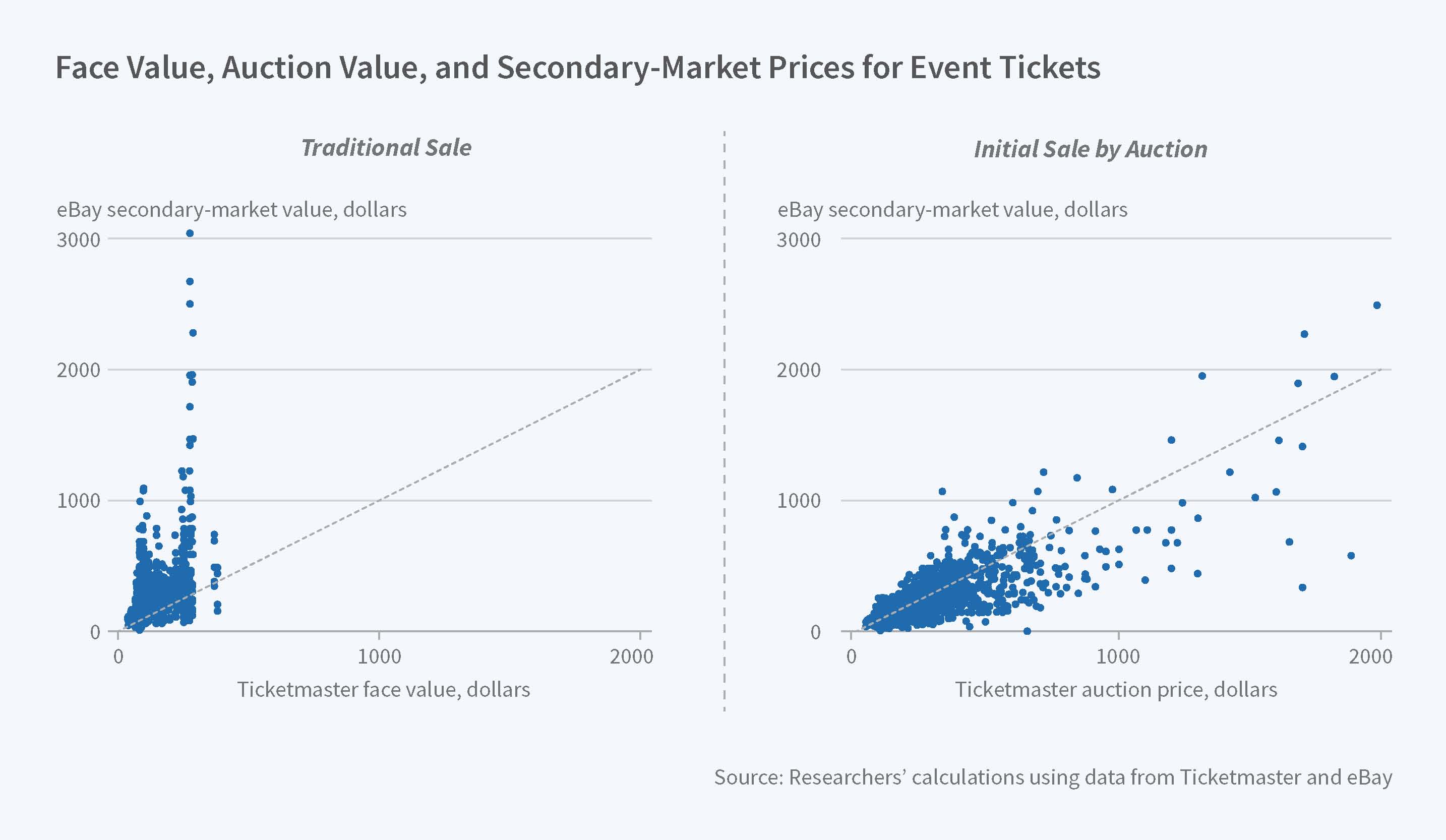 Although they reduced speculation and underpricing, event ticket auctions failed to catch on.

Artists, athletic teams, and other performers often underprice tickets for their performances, creating a large and very profitable market for ticket sales. In 2003, Ticketmaster introduced an auction system that was designed to direct more of the revenue toward the artists and less toward online resellers. In Primary-Market Auctions for Event Tickets: Eliminating the Rents of 'Bob the Broker'? (NBER Working Paper No. 23770), researchers Aditya Bhave and Eric Budish analyze these auctions. They find that although the auctions sharply reduced the profits of secondary sellers, the event companies dropped them as a mechanism for ticket sales.

To measure the effects of Ticketmaster's auctions, the researchers compare Ticketmaster prices for tickets in 759 auctions conducted in 2007 with the selling price in eBay auctions of tickets for the same concerts. The researchers are able to match proprietary Ticketmaster auction data with scraped eBay resale value data for the same event at the level of the concert, section, and row (for example, The Police, July 29, 2007, Fenway Park, Section A3, Row 2). They find that ticket prices in the primary market auctions (Ticketmaster) were, on average, very similar to prices on the secondary market (eBay). The mean resale profit was only $6.07, just about 2 percent of ticket value. Both prices were substantially higher than the face values of these tickets: the average eBay price of a ticket was $135.85 higher than the ticket's face value, or about 94 percent of ticket value. By using an auction system to sell the tickets, rather than selling them at face value, Ticketmaster eliminated the scope for profitable resale, at least on average, and nearly doubled the revenue that it raised in selling these tickets: $16.9 million versus $8.5 million.

While on average the difference between the auction prices and the resale values was small, there was substantial variance. Some tickets fetched higher prices on eBay than their auction price, but there were also large losses, where the eBay resale value was significantly less than the Ticketmaster auction price.

Thus, if professional resellers know which tickets to purchase or are better than ordinary consumers at strategically bidding for tickets, they may still find ways to turn a profit. The researchers compared the purchases of experienced bidders, defined as the winners of 10 or more Ticketmaster auctions, to those of less experienced bidders. They found that experienced bidders bought tickets that had resale profit potential averaging $19.49, compared with $2.47 for inexperienced bidders. The experienced group also was less likely to have overpaid by $100 or more per ticket, relative to the eBay resale value, than their inexperienced counterparts. Despite this difference, the $19.49 average profit from the auctions was far less than the $135.85 profit that a reseller could have realized had they been able to buy the tickets at face value rather than at auction.

Another difference is that inexperienced buyers were far more likely to bid substantially more than necessary to get the ticket. For top-quality tickets, such as first-row seats, 14 percent of buyers paid 25 percent or more in excess of what was necessary, given the other bids in the auction; one percent paid double or more. Overbidders were the most likely auction participants never to bid again.

"Our basic findings suggest that the auctions worked (as auctions should!): price discovery improved substantially; artist revenues roughly doubled versus the fixed-price counterfactual; and, perhaps most importantly, the auctions eliminated or at least substantially reduced potential resale profits for speculators," the researchers conclude.

In light of these outcomes, it is perhaps surprising that ticket auctions did not persist. The researchers note that "while auctions are no longer in use, what has at least partly taken off is using available data, including historical resale values, to set fixed prices in the primary market that more accurately approximate market clearing."

Primary-Market Auctions for Event Tickets: Eliminating the Rents of 'Bob the Broker'?