The Race to Exploit Stock Price Differences between Exchanges 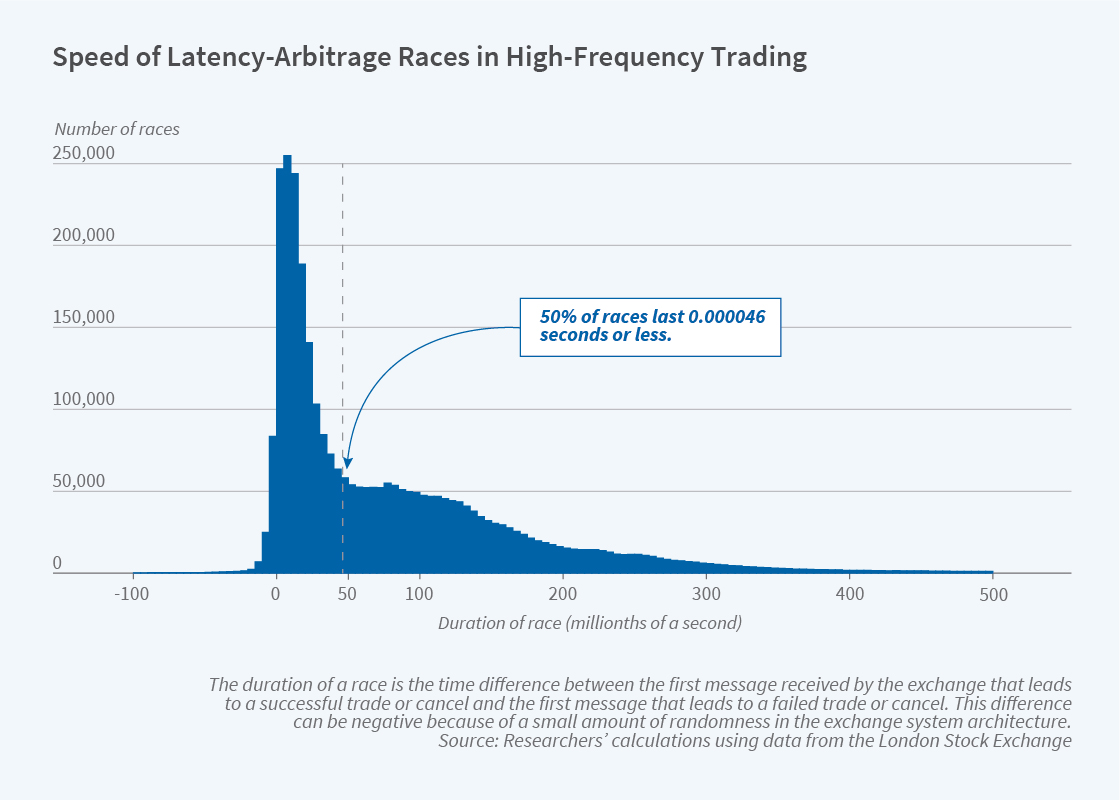 Latency-arbitrage races constitute about a fifth of total daily FTSE 350 Index trading volume and cumulate to about $5 billion annually in global equity markets.

Reducing latency, the amount of time it takes an electronic order to reach a trading venue, has become increasingly important to traders looking to profit from small, temporary price differences between exchanges. Latency-arbitrage competitions are measured in microseconds (millionths of a second), and high-frequency trading firms have invested in early access to price data and in ways to expedite orders, such as locating their computers next to the exchange’s computers in the exchange’s data center. Systematic empirical analysis of the scope and market implications of latency arbitrage is difficult, however, because conventional limit-order-book data do not capture failed trades and cancels, which is like only seeing the winner of a race and not the losers — the swift, but comparatively slower traders. This makes it hard to know for sure that a race happened.

Matteo Aquilina, Eric Budish, and Peter O’Neill present new evidence on this issue in Quantifying the High-Frequency Trading “Arms Race” (NBER Working Paper 29011). They utilize message data from the London Stock Exchange for all stocks in the FTSE 350 Index for 43 trading days in the fall of 2015. Their sample of 2.2 billion messages sent between firms and the exchange includes the failed limit or cancel order attempts of market participants, which makes it possible to directly examine races between high-frequency traders. The researchers find that latency-arbitrage races are extremely fast and that, while individual races are not particularly lucrative for the traders or consequential for the market, the large number of races leads to a significant loss of market liquidity.

The researchers define the length of a latency-arbitrage race as the time difference between the first message received by the exchange that results in a successful trade or cancel and the first message that is a failed trade or cancel. They define those whose orders are successfully executed as the winners. These competitions happen incredibly quickly. The average race takes 79 microseconds (0.000079 seconds), and modal races last between 5 and 10 microseconds. Races occur frequently; on average, there are 71,000 daily races in the FTSE 350 and one race per minute per FTSE 100 ticker. Latency-arbitrage races constitute about 20 percent of total daily trading volume.

The profit from an average competition is small, about two pounds sterling, but because there are many races, the aggregate profits are substantial. The researchers calculate the average “tax” on liquidity associated with latency-arbitrage races, the ratio of daily race profits to trading volume, to be approximately 0.53 basis points. This hit to liquidity is mostly driven by the top six high-frequency trading firms “sniping” stale quotes: quickly purchasing assets with outdated prices ahead of other traders to immediately sell them for profit. Such actions reduce, rather than increase, liquidity in the market. The top firms on net remove more liquidity from the market than they provide.

The researchers estimate that latency-arbitrage races account for about one-third of the price impact of assets involved in these trades, and that financial market reforms designed to remove latency arbitrage could decrease investor liquidity costs by 17 percent.